The first time I read a book by Colleen Hoover, I knew she would be an author whose career I’d follow. Her writing made me fall for the characters and get swept up in their stories. Each one of her novels takes you on an emotional roller coaster.

I’m known on our team and around the office as a Colleen Hoover “superfan,” and I’m proud to call myself a CoHort.

While I’ve enjoyed every one of Colleen’s books, It Ends with Us has always been my favorite. The protagonist, Lily Bloom, initially works at a marketing company in Boston and realizes she isn’t happy in her career. She quits her job to follow her passion and opens a florist shop. (When I first read this book, I also was living in Boston and working at a marketing agency with dreams of starting my own business, so maybe that’s especially why I felt as though I related to this character so much.)

When Lily meets the handsome but enigmatic Ryle Kincaid—a neurosurgery resident at one of the best hospitals in the city, she starts to think that her life is taking a positive turn. Sparks fly as they fall for each other hard and fast. But their relationship isn’t all sunshine and flowers…the pressures of their jobs start to take a toll, and Ryle is unable to control his temper. Lily knows that she shouldn’t stay with him, but she can’t imagine a life without him anymore.

After actor, director, and filmmaker Justin Baldoni read the book, he felt that this heartbreaking
story needed to be shared more broadly and decided to option the rights. So here’s what we know about this movie (so far).

In July 2019, Justin Baldoni (most famously known as Rafael Solano on the TV series Jane the
Virgin), announced on Instagram that he optioned the rights to Colleen Hoover’s It Ends with Us. The two were introduced to each other by Justin’s book agent/Colleen’s former editor, Johanna Castillo. (Source: Variety.com)

If you haven’t read it yet…here’s a bit of info about the book.

The novel was first published in 2016 by Atria Books and since has been translated into more than
twenty languages. It was voted the Best Romance novel in 2016 by the Goodreads Choice Awards.

Spoiler alert/trigger warning: This book has themes of domestic violence and abusive relationships. From the author’s note at the end of the book, you’ll learn that this story is drawn from Colleen’s personal experience.

Justin Baldoni and Colleen Hoover were both working on other projects.

Justin Baldoni isn’t new to directing a movie that also is based on a book. He made his feature film
directorial debut in March 2019 with Five Feet Apart. And he directed another film called Clouds, which released in 2020. When he wrapped on that project he started working on It Ends with Us.

Meanwhile, Colleen Hoover has been promoting her new books, Regretting You, Reminders of Him, and the sequel It Starts with Us.  She has also been on tour in Europe for her other recently published books, including Verity.

No production timeline/release date yet.

There have been no announcements (yet) about the distribution date of the film…but as soon as
there is any news we will update this page.

The cast has been announced!

When I first heard of the adaptation news, there were a few people in Hollywood who came to mind. I pictured Meghann Fahy (who plays Sutton on The Bold Type) as Lily, Nicholas Hoult as Ryle, and Liam Hemsworth as Atlas, who was Lily’s first love.

We’ll continue to update this post as more news comes in, but until then, check out the book! 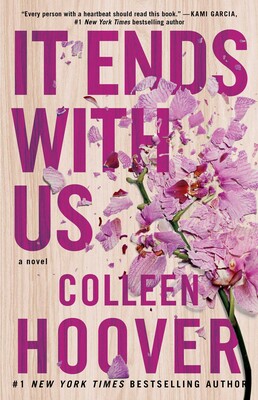 |+| Add to Your Shelf
It Ends with Us
by Colleen Hoover

Combining a captivating romance with a cast of all-too-human characters, Colleen Hoover’s It Ends With Us is an unforgettable tale of love that comes at the ultimate price.

|+| Add to Your Shelf
It Ends with Us
Colleen Hoover

Lily hasn’t always had it easy, but that’s never stopped her from working hard for the life she wants. She’s come a long way from the small town where she grew up—she graduated from college, moved to Boston, and started her own business. And when she feels a spark with a gorgeous neurosurgeon named Ryle Kincaid, everything in Lily’s life seems too good to be true.

Ryle is assertive, stubborn, maybe even a little arrogant. He’s also sensitive, brilliant, and has a total soft spot for Lily. And the way he looks in scrubs certainly doesn’t hurt. Lily can’t get him out of her head. But Ryle’s complete aversion to relationships is disturbing. Even as Lily finds herself becoming the exception to his “no dating” rule, she can’t help but wonder what made him that way in the first place.

As questions about her new relationship overwhelm her, so do thoughts of Atlas Corrigan—her first love and a link to the past she left behind. He was her kindred spirit, her protector. When Atlas suddenly reappears, everything Lily has built with Ryle is threatened.

An honest, evocative, and tender novel, It Ends with Us is “a glorious and touching read, a forever keeper. The kind of book that gets handed down” (USA TODAY).

17 Bookish Holiday Gift Ideas to Delight Your Loved Ones