“We cast a shadow on something wherever we stand, and it is no good moving from place to place to save things; because the shadow always follows.” —George Emerson from A ROOM WITH A VIEW

I first read A ROOM WITH A VIEW when I was 21 years old, while backpacking in Europe with my best friend, Kasey. Indeed, I was on a train to Florence when I began the novel, finishing it in our one-star hotel room, where, if you craned your neck, you could see a view of the Duomo from the window—the same view protagonist Lucy Honeychurch and cousin Charlotte believed they had been cheated out of at the Pension Bertolini, when they were placed in rooms facing the courtyard. For Lucy Honeychurch, there was no romance in Florence without a view of the Duomo. I was as taken with the city’s food as I was with its architecture, and to this day I remember the pistachio gelato I could buy on nearly every street corner and the panini at All’antico Vinaio, especially the one with pesto, mozzarella, chicken, and the sweetest little tomatoes I had ever tasted. What a summer—panini, novels, trains, my best friend, and all of my possessions crammed into a backpack that, even when full, weighed less than 20 pounds, as mandated by Rick Steves, the budget travel guru that Kasey and I had adopted as our patron saint. Lucy and Charlotte had their Baedeker; we had Rick Steves’s “Europe Through The Back Door.”

When you’re young and traveling by train through Europe, staying in hostels and cheap hotels, you make friends easily. It was over an al fresco dinner in Florence that I found a fellow E. M. Forster fan. Our new friend, she of the red hair and heavy eye makeup—let’s call her Sophia—told me that her favorite part of A ROOM WITH A VIEW was when Mr. Emerson tells Lucy she has gotten herself into a muddle. Sophia was struck by the word muddle, which described the confusion and disorder that was self-afflicted, but felt binding nonetheless. Once alerted to the term, I realized that muddle shows up throughout the novel. And it was, indeed, a muddle that Lucy had gotten herself into near the book’s conclusion, lying to George by telling him she did not love him, lying to Cecil by telling him that she was not leaving him because she loved another, lying to her family by telling them that she really did want to accompany the elderly Miss Alans to Greece (and possibly around the world!).

Lucy was stuck in a muddle, and then old Mr. Emerson—with a surprising assist from poor Charlotte—intervened. How lovely if, in life, when you were about to make an unwise decision—one that would haunt you, placing you on the path to eventual bitterness—an elderly gentleman said, “My dear, I am worried about you. It seems to me…that you are in a muddle,” and then helped you find your way out of it.

I’ve reread A ROOM WITH A VIEW several times since my introduction to it in Italy, and I’ve watched the film version by Merchant Ivory Productions. It’s such an accessible story, funny at times, poignant, wistful, romantic: George tossing away Lucy’s postcards so she won’t see the blood spilled on them from the violence she inadvertently witnessed in Santa Croce; Lucy bursting through the field of violets on an Italian hilltop and finding herself in George’s arms; Freddy, Lucy’s little brother, enticing George and the Reverend Beebe to “come and have a bathe,” which leads to Lucy running into a naked George as he, Freddy, and the sanguine Beebe transform a little playful splashing into a raucous game of chase through the woods; dreadful old Cecil and his fussy little opinions, juxtaposed with his startling self-awareness and generosity when Lucy breaks off their engagement. It’s all so wonderful and charming and life-affirming, and so very gentle in its depiction of a middle-class family in the suburbs of London.

Recently I was asked to lead—remotely—a book club conversation that took place at the fabulous Rakestraw Books in Danville, California. As discussion leader, I got to pick the book. I chose A ROOM WITH A VIEW, and when asked why, I said it is the refreshing innocence of it all—that it’s a study of (mostly) good people, with obvious foibles of course, but who love one another as best they can, who save one another from muddles, who take genuine pleasure in a game of tennis or a dip in the cool water in the woods behind the family home. And then Michael Barnard, Rakestraw’s owner, brought up a truth I had never before considered: A ROOM WITH A VIEWwas first published in 1908. Six years later, World War I would begin. Many of the young men I had grown to love, including George Emerson and Freddy Honeychurch, would go off to fight in the war, and would very likely be maimed or killed. The gentle world found in A ROOM WITH A VIEW would not last.

George tells Lucy that “the shadow always follows.” His words are as true in literature as they are in life. My own experience of unencumbered European travel via train when I was twenty-one is a story of privilege, but it is also one of simple pleasure (all that pistachio gelato!) and of youth. How could I have guessed at the time what calamities lay ahead, both on a personal and a national level? The shadow always follows is a truth I force my own characters to reckon with in my latest novel, WE ARE ALL GOOD PEOPLE HERE. So how do we best live, knowing there is no escaping the shadow? I take heart in George’s advice to Lucy: “Choose a place where you won’t do harm—yes, choose a place where you won’t do very much harm, and stand in it for all you are worth, facing the sunshine.”

A Room with a View
by E. M. Forster 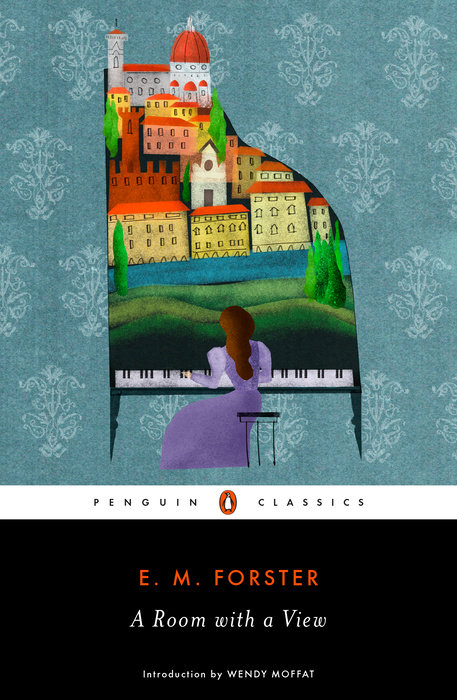