I’m a nonviolent person; I loathe guns. But give me a book about the Wild West, and I’m in heaven. What is it that calls to me? Maybe it’s the untamed country, the wrenching decisions, the mingling of societies. The tragic plight of the Native Americans whose land it was first is always the mournful tune playing in the background, yet there’s excitement and awe in the gritty stories of those who set out to claim it for themselves. So it’s no surprise that I absolutely fell for NEWS OF THE WORLD by Paulette Jiles.

Oh, this novel! A simple story, really: an epic journey, two unlikely characters forming a bond, a satisfying ending. Yet the emotions it stirs are complex; the characters fully imagined.

It’s Texas, 1870. Seventy-one-year-old Captain Jefferson Kidd is disillusioned; he’s seen three wars, fought in two of them, and is trying to find some purpose—as well as cash—in delivering the news. He travels all over Texas reading from newspapers, hoping that by bringing news of the outside world to the illiterate and insulated, he can do some good. Lately, he’s been having doubts. But then he’s asked to bring a ten-year-old girl named Johanna back to her family. The catch is, this is a white girl who was kidnapped by the Kiawah four years earlier; she is now fully acclimated into the tribe. And determined to rejoin it.

Kidd is a man of iron will and noble intentions; he is also old and weary. But he accepts, and soon the unlikely pair embarks on a treacherous path. The untamed land, those who would take the girl for evil intentions, the dangerous politics of Texas during the Reconstruction—and a young warrior girl who is not going to return quietly to a society she can’t remember; all will test Kidd’s grit.

But something happens during the journey. The grizzled captain and the young outsider (for she now belongs to neither world, the Native American or the white) form a bond. They have to rely on each other to get through this trial—a gunfight, the hypocrisy of those who call themselves Christians, the shoot first ask questions later culture of Texas. And when the time comes for the Captain to leave his brave little companion with her forbidding German relatives, he will have to make a decision that goes against his very code.

It’s a very funny novel, as well as one full of heart. The Captain is a wryly humorous man, and Johanna is endearingly earnest. The relationship they form, and the poignant ending they create for themselves, will move you to tears.

For it turns out that the news of the world is that everything is just fine, when you open your heart and put your trust in the hands of the person who will fight with you for justice and tolerance. Even if that person is only ten years old.

News of the World
by Paulette Jiles 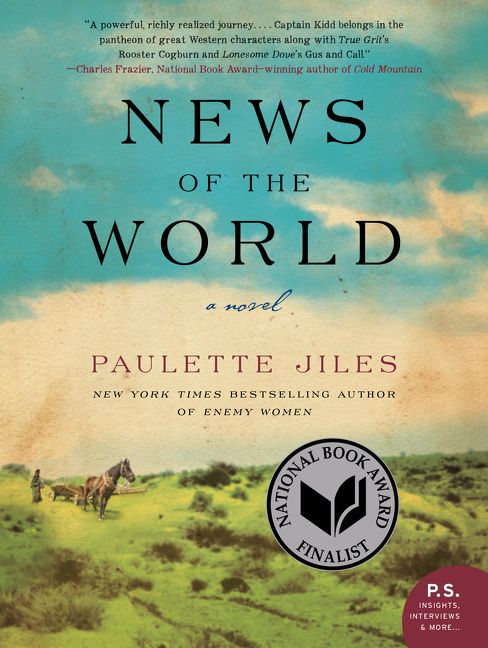 |+| Add to Your Shelf
News of the World
Paulette Jiles

Fiction on the Frontier: 7 Books Set in the Wild West

Don’t Mess With Texas: 9 Books That Take Place in the Lone Star State

A Gritty Novel About the Wild West with Lots of Heart