Not many authors can swirl genres together, let alone do so with a masterful hand. But Liane Moriarty, a queen of the beach reads, wraps every page of her novels around a mystery—and it’s one reason why she’s one of my all-time favorites writers. Why choose when you can dive into a thoughtful, domestic story with relatable characters, and a taut, nail-biting plot that prompts the pages to practically flip themselves?

WHAT ALICE FORGOT didn’t hit the dizzying heights of her bestseller-turned-HBO series BIG LITTLE LIES (hey, it’s hard to compete with that Nicole Kidman/Alexander Skarsgård shower scene!)—but this quieter novel, one of her early ones, is every bit as compelling. Continuing with the theme running through her body of work, Moriarty peels back the façade of a seemingly sunny suburban life to expose its dark secrets. Unlike the murder at the heart of BIG LITTLE LIES, the knotty center of WHAT ALICE FORGOT revolves around something far more common: the death of a marriage.

Alice Love is 29, desperately in love with her husband, and pregnant with her first child. At least, she thinks so.

Then she learns she has cracked her head on the floor of a gym, erasing a decade of her memory. The truth is, she’s on the cusp of 40, a tightly wound mother of three, and she and her husband are divorcing.

Alice turns into an investigator, with her past as her target. She pieces together bits of her own narrative as she tries to figure out how everything got so off track, and why she hates her husband. Amnesia aside, whose life hasn’t veered away from a happy path at one point or another? Indeed, the two other narrators of this book also explore the theme of forks in the road not taken in a woman’s life and the consequences. Alice’s sister, whose story is told in first-person journal entries, is struggling with infertility, and Alice’s grandmother writes letters to a man lost in her past. Learning about their choices encourages the reader to wonder about her own.

The clever construction and pacing of Moriarty’s novel made me yearn to whip through it (even upon a third reading), but the message this book carries lingered long after I closed it and turned off my nightstand light—way past my usual bedtime: If we could somehow time-travel a decade into the future, what would we think of the people we became?

What Alice Forgot
by Liane Moriarty 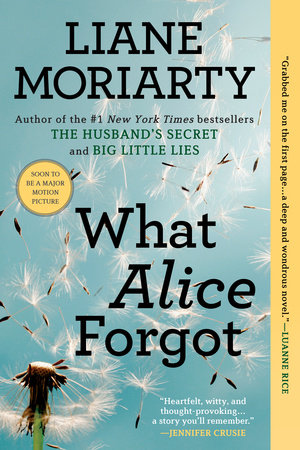 |+| Add to Your Shelf
What Alice Forgot
Liane Moriarty

Welcome to a lighthearted, funny page-turner wrapped around a bigger question: Are you the kind of parent you thought you’d be before you had kids? If the answer is a resounding no, you must meet Alice.

The Perfect Beach Read Wrapped in a Page-Turning Mystery

You may also like these 15 Books to Read if You’re Obsessed with BIG LITTLE LIES.