Everyone knows not to judge a book by its cover, but I’m sometimes guilty of judging one by its title—which is exactly what I did when I spotted Marisha Pessl’s SPECIAL TOPICS IN CALAMITY PHYSICS in a used bookstore in Thailand.

I had been backpacking around Southeast Asia for a few weeks and had grown accustomed to seeing the same limited selection of English titles available—THE SHINING; THE FIRM; EAT, PRAY, LOVE—all of which I had already read. Among those usual suspects, SPECIAL TOPICS IN CALAMITY PHYSICS stood out.

Intrigued, I pulled it from the shelf and opened it. I was hooked from my first glance at the table of contents, which was styled as “Core Curriculum (Required Reading).” All the chapters were named for books, ranging from “Othello” (Chapter 1) to “Howl and Other Poems” (Chapter 19). Flipping through the pages, I spotted citations to other books and films littered throughout the text and the occasional illustration labeled as a “visual aid.” It was a book lover’s dream.

I was immediately smitten with the inventive format, but it was the story that really seduced me. It is, at its heart, a coming-of-age novel starring the improbably named Blue van Meer, who, following the death of her mother, has moved frequently around the country with her itinerant professor father. Starting her senior year in a new town at the elite St. Galway School, Blue falls in with a strange group of wealthy fellow students nicknamed “the Bluebloods” and their enigmatic film studies teacher, Hannah Schneider. It is also, however, a mystery, in that we know from one of the very first paragraphs that Hannah winds up dead, and that Blue remains troubled by her death.

Before befriending the Bluebloods, Blue was dependent upon her father for company, and they shared their love of literature while debating topics ranging from class warfare to classic films. Blue’s father retains his professorial attitude at home, often issuing directives on how one should conduct oneself. “Always live your life with your biography in mind,” he tells Blue in one of my favorite lines ever. “Naturally, it won’t be published unless you have a Magnificent Reason, but at the very least you will be living grandly.”

Blue knows she hasn’t yet found her Magnificent Reason, but nonetheless feels compelled to write about what happened after she landed at St. Galway, trying to make sense of Hannah’s untimely death and, more importantly, the reasons behind it. What follows is a heavily annotated account told through the eyes of an extremely well-read and highly perceptive teenager.

At more than 500 pages, SPECIAL TOPICS IN CALAMITY PHYSICS isn’t a quick read, but it is a captivating one. I found myself unable to put it down—not even to wade into the crystal blue water surrounding the Thai island I was on—until it was finished. I’ve subsequently pressed this book into the hands of many readers, and it’s still the first that I recommend to friends, even 10 years after I first read it. 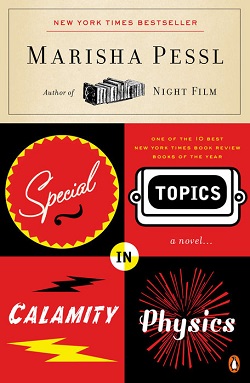 Notice: Trying to access array offset on value of type null in /home/offtheshelf/public_html/web/app/themes/ots/_inc/template-parts/books/book-modal.php on line 31
|+| Add to Your Shelf
Special Topics in Calamity Physics
Marisha Pessl

Heralded by critics and readers alike as the arrival of a vibrant new voice in fiction, Marisha Pessl’s debut is a fast-paced, mind-boggling thriller steeped in literature, philosophy, science, and cinema..... Page Count: 528