What’s it like to fake your own death? If you’re eagerly awaiting the third season of Serial and binge-watching every true crime show on Netflix, you need to check out the incredible debut that answers that question.

Elizabeth Greenwood admits that there’s a huge barrier in understanding death fraud (or pseudocide, as the pros call it). There are no reliable statistics on those who go through with it, because we only learn about the failures. But this doesn’t stop her from trying. When a friend jokingly suggests Greenwood fake her own death to avoid paying back her massive student loan debt, a deep dive on Google turns into an earnest fascination with the subject, which—after years of research and obtaining her very own death certificate—turns into PLAYING DEAD.

I couldn’t stop talking about this book after reading it. First off, it’s full of the kind of bizarre, fascinating information you never knew you needed. For instance: many pseudocide plans get busted because of minor traffic offenses (“For the love of God, don’t drive if you’re supposed to be dead. Ditch the car”). Michael Jackson’s legal middle name is Joe, but is written as Joseph on his death certificate—one of the signs that a passionate community of believers point to as proof that his death was a hoax and he still walks among us. Death fraud is a “heavily male phenomenon,” though, Greenwood argues, “Maybe women fake their deaths just as much as men. They just don’t get caught.”

The list goes on and on, but this book is much more than a collection of gruesome fun facts. Woven into Greenwood’s interviews and research are remarkable insights about relationships, freedom, and the way we see ourselves in the world.

I usually hate to judge any story based on how “relatable” I find the writer or the narrator—I know that great writing is great writing, even if it offers me nothing I can apply directly to my own life. But because young female authors are so underrepresented in the true crime space, I’m going to give myself a pass here.

I admit that part of what made PLAYING DEAD so special to me was Greenwood herself, facing some of the same issues as my friends and I: expensive liberal arts degrees we sometimes regret, a nagging feeling that maybe we should leave the cities we live in and try something new, and too much time spent reading about conspiracy theories on the internet. She followed these very common anxieties down a . . . less than common line of reasoning, and came out with a bold, darkly funny, and deeply thoughtful read.

Though I went in with an open mind, I wouldn’t ultimately recommend faking your own death. Pseudocide itself isn’t technically illegal, but there are plenty of crimes you’ll probably commit in the process, and too many tiny missteps that could abruptly end your afterlife. But I highly recommend this book to anyone who’ll listen. 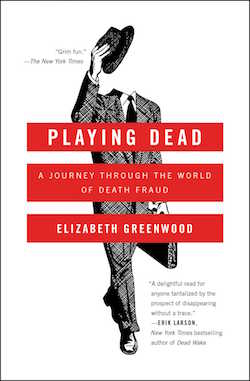 5 Books to Die For: A Reading List for Fans of “The Good Place”

An Addictive, Insightful Book About How to Fake Your Own Death