In case you missed it, The Off the Shelf Book Club had a fantastic discussion on Facebook Live! We discussed Ruth Ware’s novel THE LYING GAME, lies, lies, and more lies, and “ride-or-die” friendships.

We couldn’t get enough of this page-turning thriller about four childhood friends, the secrets of their past, and the dangerous games teenaged girls play. Here’s why:

1. Lies, Lies, Lies. Lies play a big role in this novel. The lies the four friends tell themselves, the lies they tell others, and the lies they’ve sworn to not tell each other—create an interesting dynamic between the characters. Unlike many unreliable narrator novels, the unreliable narrators in THE LYING GAME are known liars and the readers are taken to task to figure out what’s lie and what’s truth. Ruth Ware handles this expertly, creating a history of lies in the characters lives that ultimately comes back to haunt them. With so much to unravel, this novel certainly kept us invested and turning pages.

2. The Setting. THE LYING GAME takes place in a idyllic, “touristy” sea side town yet the four women spend their time in a crumbling tide mill. Ware uses the tide mill setting to isolate the characters which makes for an isolating, chilling read. Our book club noted how Ware has used isolating settings in her previous novels to create tension and heighten the stakes. The nature of the tide mill in THE LYING GAME—which creates a fickle lifestyle for the mill inhabitants as they depend on the tides for water—mirrors the relationship between the “fair-weather” friends who drift apart and come back together throughout their lives. Julianna says, “I think the setting does so much to emphasize the main points of this book. […] [Ware] is really good a matching a place, and a feeling, and an atmosphere with what’s going on in the story.” The tide mill adds another dynamic character to the already complicated relationships within the novel. 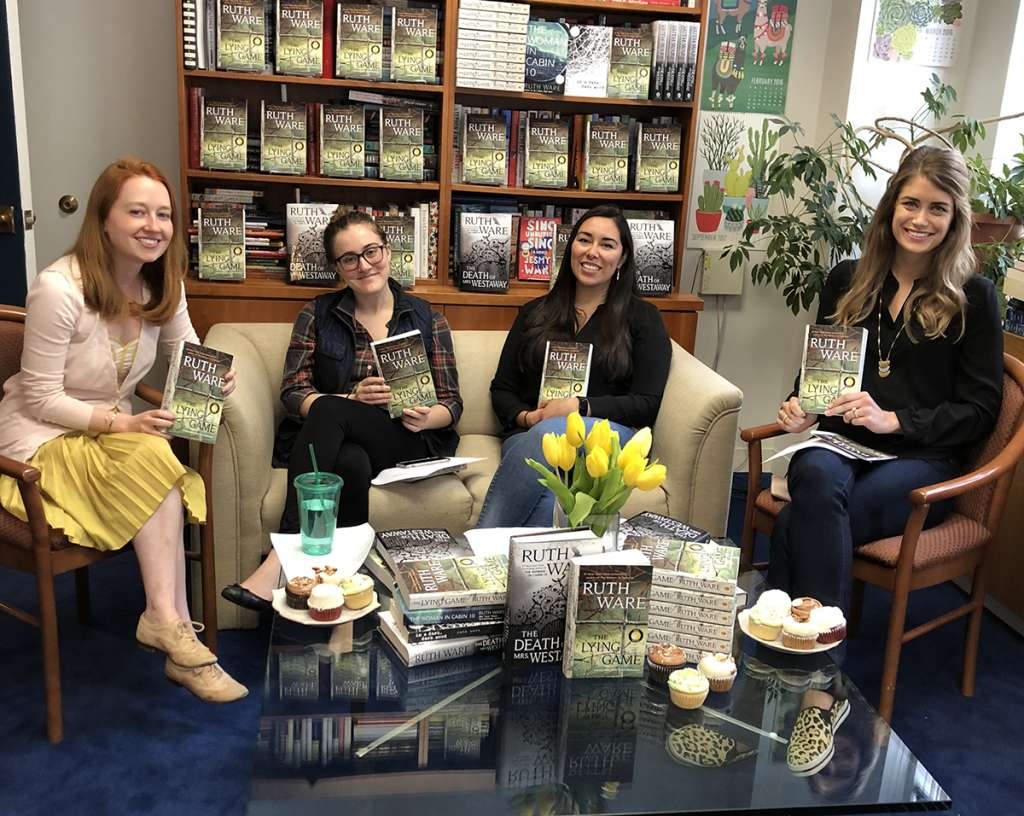 3. Ruth Ware’s amazing backlist! Ruth Ware has an amazing collection of suspense novels that we can’t stop talking about. Since her 2015 debut, Ware has become one of our favorite thriller-writers with follow-ups like THE WOMAN IN CABIN 10, THE LYING GAME, and her latest, THE DEATH OF MRS. WESTAWAY. Julianna’s favorite Ruth Ware novel is IN A DARK, DARK WOOD because it stood out amongst many unreliable-narrator books of its time. Sarah Jane agrees and loves the claustrophobic and intense setting. Megan’s favorite is Ware’s latest, THE DEATH OF MRS. WESTAWAY, on sale May 29!

4. The “Ride-or-Die” Friendships. When the women receive a single text message—”I need you”—they all come running to the defense of their friend and even lie to loved ones in the process. THE LYING GAME redefines what makes a good friend but also plays with the dangerous lengths some people are willing to go for a friend (this is what a ride-or-die, friend is). Sarah Jane really responded to the interesting group dynamic as there are cliques within the group. IN A DARK, DARK WOOD, like THE LYING GAME also deals with friendship dynamics. Both novels delve into the complexity of female friendships—long term, short term, and broken friendships.

5. Ruth Ware. Is. AMAZING. Diana and Megan have both met and worked with Ruth Ware on all four of her fantastic books! Megan, Ruth Ware’s book publicist, was happy to learn that Ware herself was a book publicist before venturing into a full-time writing career. Ware’s knowledge of the industry makes her especially fun and easy to work with!

6. Our Dream THE LYING GAME Movie Cast. The best part of any book club discussion? Casting the imaginary movie with our favorite actors! Diana says she would cast Jeremy Irons as Ambrose while Julianna believes Reese Witherspoon—who made THE LYING GAME a RW Book Club selection—should be in the movie as well. Sarah Jane believes Krysten Ritter—who also loved this book—would be a great addition to THE LYING GAME film. Who would you cast in the movie?

Check out Ruth Ware on Facebook Live reading the first chapter of THE DEATH OF MRS. WESTAWAY.