American culture has always been fascinated by the Western landscape. Countless tales, portrayed in nearly every medium, have compelled audiences with depictions of the frontier in all its wonderful grit and glory. Yet few have captured the American West in literature better than the Pulitzer Prize–winning author Larry McMurtry, creator of the famed Lonesome Dove tetralogy.

McMurtry’s Western novels take readers through the second half of the nineteenth century, focusing on a group of endearing Texas Rangers steered by two of the most unforgettable heroes of contemporary fiction: Augustus McCrae and Woodrow Call. Gus, a vice-ridden Ranger-savant, and Call, a hardheaded, dutiful loner, serve as our wonderfully flawed guides as we follow the Rangers from their youthful beginnings through the end of their adventurous careers.

The remarkable second novel in the series, COMANCHE MOON, finds Call and McCrae the newly promoted cocaptains to their troop, following the departure of their superior, Inish Scull. An eccentric, war-hardened Bostonian, Scull suddenly leaves after his prized mount is stolen by the notorious horse-thieving Indian Kicking Wolf. He pursues Kicking Wolf into Mexico, only to find that he is being led to the camp of a murderous Mexican bandit, Ahumado. When Ahumado inevitably captures Scull, Call and McCrae, in true Ranger fashion, make the dangerous journey south to save him.

Along the way, we become intimately familiar with our captains and their unique brand of communication. The two men, governed by totally different values, consistently find themselves in moral crises, each only to be criticized by the other in moments of laughable hypocrisy. McCrae, well known for his drinking and whoring, is condemned by Call for not embracing his command post and setting an example for the other, younger Rangers. While Call, who refuses to accept his role in having fathered a child by a local prostitute, is scolded by McCrae for not accepting his paternal responsibilities. Much to our delight, the Rangers comically butt heads as they grapple with these complex life issues all while defeating rogue tribes and saving Scull with unmatched efficiency.

Meanwhile, back in Texas, is Buffalo Hump, a Comanche chief burdened with keeping tribal traditions alive as the ever-expanding white population encroaches further west. Buffalo Hump leads his warriors in a final stand against their trespassing enemies—attacking and killing any and all the whites passing through on their way to the Gulf of Mexico. During the campaign, we learn of the decaying relationship between Buffalo Hump and his half-Mexican son, Blue Duck, a young man uninterested with tribal customs and eager to step out from his father’s shadow. The captivating decline of their familial bond ultimately leads to Blue Duck’s banishment and his promise to return for his father’s severed head.

While the constant clashes between the Texas Rangers and the Native Americans certainly provides an enticing story, it is the characters themselves who drive this mesmerizing novel. McCrae and Call’s relationship alone is worth the price of admission. The two men are complete opposites, and yet they always seem to balance out each other’s flaws, resulting in a charming brotherhood bursting with humor. To challenge them, McMurtry fills out the remaining cast with vivid antagonists such as Ahumado and Blue Duck—powerful men forced to indulge in violent tendencies to fulfill a perceived destiny.

All of these profound characters linger long after the final page. And with a fluid writing style that perfectly captures the rough and rugged feel of the American West, Larry McMurtry has succeeded in creating the only Westerns you’ll ever need to read. You may start with COMANCHE MOON, but rest assured, you’ll be reading the entire Lonesome Dove series shortly after. 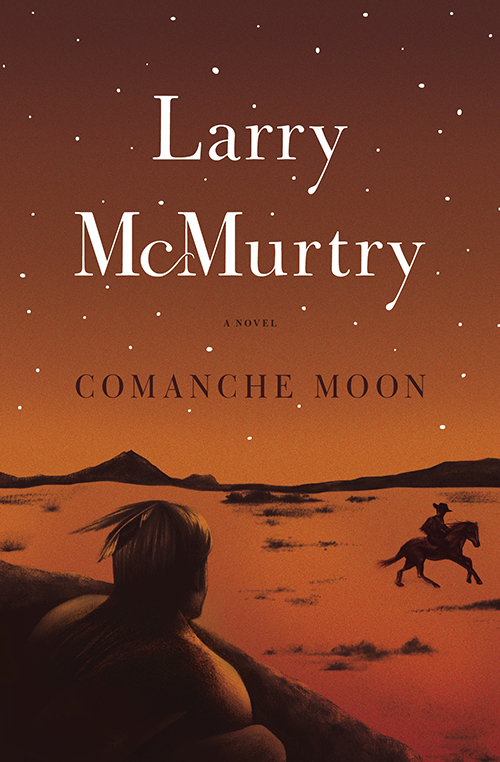 Notice: Trying to access array offset on value of type null in /home/offtheshelf/public_html/web/app/themes/ots/_inc/template-parts/books/book-modal.php on line 31
|+| Add to Your Shelf
Comanche Moon
Larry McMurtry