The saying goes, “Father Time is undefeated,” and the meaning is pretty straightforward: as a person ages, their potential for significance (whether in an athletic or a creative capacity) ultimately dwindles. This thinking is frequently applied to aging sports legends, veteran employees, and fading musicians. But no matter the inevitability of time’s march, it is life’s twists and turns that afford each of us the opportunity to grow and impact our surrounding world. That is the idea, at least, behind Jennifer Egan’s Pulitzer Prize–winning masterpiece, A VISIT FROM THE GOON SQUAD.

Meet music mogul Bennie Salazar and his young personal assistant, Sasha. The first chapters of the novel alternate between their two points on view. Both Bennie and Sasha narrate in the present day to allow the reader a first-person account of when they knew one another intimately.

Sasha, recently let go by Bennie, is on a date and indulging in the kleptomania that has left her both unemployed and living in a tiny apartment filled with random, useless objects. Bennie, now an aging music executive, is attempting to salvage the deal to sign one of his similarly waning artists but is hampered by his “shame memories,” memories that extinguish the creative spark he so desperately hopes to re-create later in life. These are the brief portraits Egan initially provides of her flawed characters. What follows is a journey that reveals the powerful relationships that shaped these two people, tracing their lives through intricate passages of time.

Through her effortless writing and satirical, dark humor, Egan explores the lives of Bennie and Sasha by allowing the people they choose to surround themselves with to explain for them. In subsequent chapters, which follow Bennie’s bandmates, his ex-wife, and his mentor, we learn of his beginnings as the de facto manager of his high school punk-rock band, the Flaming Dildos, and his eventual rise to music-producer fame. Over the course of the novel the reader is invited to piece together this portrait of Bennie based on the insights of the affiliate characters and the relationships they have with him as a man, husband, and music executive. Likewise, Sasha comes to be defined by her now-deceased college companion, her complacent uncle, and her overly curious daughter.

What makes A VISIT FROM THE GOON SQUAD so compelling is Egan’s ability to, first, connect all these characters through cohesive story lines and, second, to provide each chapter’s focus character with their own intimate profile outside of their marginal connection to Bennie or Sasha. In the course of a single chapter, Egan adapts her form to create entire devastating story arcs for secondary characters as memorable as those of our protagonists’. Take Rob, for instance, Sasha’s college confidant who struggles to overcome the confusion of his sexuality and a recent suicide attempt, only to find himself completely isolated and lost. Or Bosco, Bennie’s former star musician, now aged and in severely poor health, who aims to go on tour one last time, with the hope of dying on stage in the perfect, public spectacle.

All of these characters convey the many stages of life we all will encounter and the ever-changing roles we play. Jennifer Egan’s vivid portraits allow the reader a satisfyingly raw look at authentic people who are molded and fractured by those around them. A character-driven novel at its best, A VISIT FROM THE GOON SQUAD will resonate for years to come.

A Visit from the Goon Squad
by Jennifer Egan 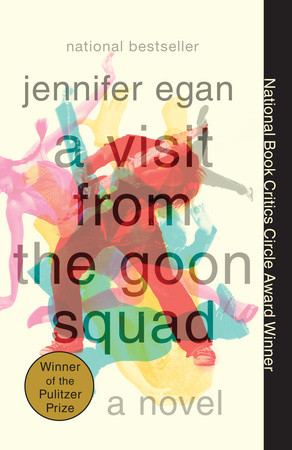