Time magazine called Bryan Stevenson’s JUST MERCY one of the 10 best nonfiction books of 2014. The next year, it won the Andrew Carnegie Medal for Excellence and the Dayton Literary Peace Prize. I wouldn’t have known. The book was sitting on my nightstand, making me feel slightly guilty.

It had been recommended to me by a trusted source, but I knew it was about the author’s work as a lawyer representing people condemned to die, and somehow, it just didn’t seem like the right book to pick up when I was hoping to get a few hours of sleep. It took me a year to crack the first page, but then I read it quickly, and when I finished, I went back and read it again.

JUST MERCY is a serious endeavor, and yet the writing is light and adept and elegant. Of all things, this tale of abuse and injustice, of cruelty and hate, reads fast. It’s upsetting, but not overwhelming. I felt sorrow and horror, but ultimately, I was left enriched. Stevenson gifted me with people I had no other way of knowing. In telling me their stories, he shared little about himself, and this fact stays with me, too: the humility expressed in what he did not include.

I recommend this book not so you will be reminded of what you surely have already learned: that our systems are imperfect, that the poor and the ill-educated and the disabled can be victimized, that racism yet resonates. I didn’t think I needed to read more about these realities, and yet, Stevenson opened my eyes to problems I thought I already saw. He reminded me of why hatred wounds for so long, and also of how powerful an antidote love is.

Instead, I recommend JUST MERCY to you for the uplifting experience of reading about someone who has spent his entire adult life fighting for people who are often ignored. A person brave enough to deliver to a man the news that he will die that night, and then to sit listening to that man, touching him, in the hours before he is executed, and finally to embrace that man’s wife as she screams in despair. And to have done this—to have offered this intimate solace, and also to have done the arduous emotional, intellectual, and physical work of trying to bring justice to those whom our justice system has disdained—for decades.

As a Harvard-educated lawyer, Stevenson could have had a life of ease. Yet he chose to sit in one prison cell after another, to hold the hand of one desperate person after another, to take into his arms a 14-year-old child who had been raped the night before by more adult prisoners than he could count.

It’s humbling to think of his journey. And it’s all there in the form of this book, in the way a reader learns so much about each condemned person and so little about the author himself. The book’s epigraph comes from the theologian Reinhold Niebuhr: “Love is the motive, but justice is the instrument.”

Laura McBride is the author of WE ARE CALLED TO RISE and ’ROUND MIDNIGHT. 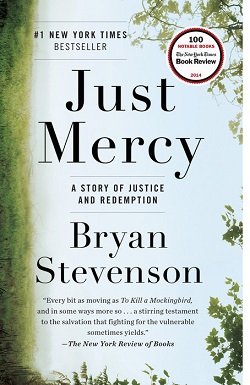 A powerful true story about the potential for mercy to redeem us, and an unwavering call to fix our broken justice system, from the influential lawyer behind the Equal Justice Initiative.