I just finished rereading THE LAST SAMURAI, an excellent novel by Helen DeWitt about a genius grad-school dropout named Sibylla, who is raising a genius, her son Ludo. Because Ludo has no father, Sibylla brings him up on repeat viewings of Akira Kurosawa’s film “Seven Samurai,” figuring Ludo might as well be exposed to the best male influences, if any at all.

Ludo and Sibylla have very little money. They often admire expensive books they can’t afford, books that Sibylla believes no home should be without. These are books I’ve never heard of, insanely challenging works of Greek scholarship, primary scholarly sources, first editions, that sort of thing. For people without much money, such books and the pursuits they embody are usually considered a privilege; books aren’t really part of the family budget, but Syb keeps breaking the rules. Ludo learns ancient Greek by the age of four, Japanese not long after, then solid-state physics—all from books that his mom, perhaps unwisely, keeps buying him.

In the second half of the book, Sibylla struggles to cope with the world outside her own brilliant, meta-logical brain and has previously attempted suicide. Ludo, at 11 years old, sets out to find his real father, and then to find any father figure—someone who can help him “save” his mother. DeWitt beautifully portrays the love between Sibylla and Ludo, the despair that can still invade a person’s soul despite her intelligence, and a mother-son journey of self-actualization, showing readers the ways in which the power of love can, and can’t, save you.

THE LAST SAMURAI is also a story about money. At one point, after seeking wisdom from long-dead authors, Sibylla says, “I thought suddenly that it was stupid to be so sentimental. What we needed was not a hero to worship but money. If we had money we could go anywhere. Give us the money and we would be the heroes.”

So much beneath the surface of this novel is driven by that sentiment—the lack of money or the want of it. Sibylla must ride the London subway all day in the winter to keep Ludo warm, because she can’t afford to heat their house with the little money she makes as a transcriptionist. They are physically okay, they survive, but Sibylla feels unfulfilled. She wants to be doing her real work in academia. More than her financial struggles, she resents the time she must spend away from her own pursuit of knowledge, and she resents the structures that make her materially responsible for another human’s life.

Helen DeWitt has often spoken about her problems with money and her need for it. She’s open about her own financial struggles in a way few “acclaimed” authors are. Among other things, in this novel DeWitt is, in effect, asserting that art—literature, specifically—is a necessary component of survival. Actual, physical, literal survival. This is the sort of revolutionary statement that makes THE LAST SAMURAI a Molotov cocktail of a book, an incendiary experience for readers that breaks through the mundanity of life, work, and love to achieve greatness.

The Last Samurai
by Helen DeWitt 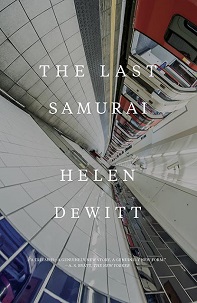 |+| Add to Your Shelf
The Last Samurai
Helen DeWitt