The tiny country of Belize packs a lot into its 9,000 square miles—an area about the size of New Jersey. The Central American nation boasts stunning Mayan ruins, a vast network of caves, extensive undeveloped regions (more than 60 percent of the country is forested, and much of that area is protected), extraordinarily diverse wildlife and human culture, beautiful beaches, and the second-largest barrier reef in the world. Belize is also home to the scarlet macaw, considered by many to be the most beautiful bird in the world.

But, as with all nations, Belize also has a dark side.

In 1982, itinerant adventurer-environmentalist Sharon Matola arrived in Belize to work on a documentary film about tropical forests. And there she stayed, founding the Belize Zoo a year later and turning it into a world-class, though financially struggling, institution for the care of orphaned wildlife.

Then, in the early 2000s, she learned of a plan to construct a hydroelectric dam that would submerge a pristine section of rainforest that was a prime habitat for the rapidly vanishing scarlet macaw. Bruce Barcott’s THE LAST FLIGHT OF THE SCARLET MACAW chronicles Matola’s courageous fight for environmental conservation and the wildlife that called it home.

Macaws are the largest parrots in the world. Scarlet macaws, with their kaleidoscopic red, blue, and yellow plumage, measure nearly three feet in length from beak to tail tip. They may live more than 50 years and they mate for life. What’s not to like about them?

Though the macaws are the book’s primary wildlife protagonists, other exotic species including jaguars, tapirs, and howler monkeys share the stage. And all were threatened by the proposed dam.

Matola decided to fight the project.

What happened next, as narrated by Bruce Barcott, is partly adventure story, partly thriller, partly environmental elegy, and partly a chronicle of corruption and greed. And through it all, Sharon Matola persevered, against overwhelming odds. Barcott is a first-rate, award-winning reporter who writes for the New York Times. His reportorial skills are on full display as he shadows Matola for over three years during her high-risk, often lonely battles against the entrenched powers-that-be. His account is as much insightful biography as it is a gripping narrative.

The surprising ending will leave you thinking—and questioning—long after you finish the book.

The Last Flight of the Scarlet Macaw
by Bruce Barcott 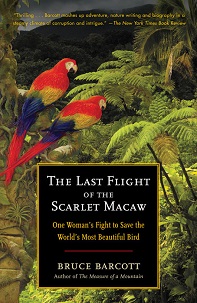