When I made the decision to attend a women’s college, my male peers did not hesitate to tell me how unprepared I would be for the real world by missing out on the co-ed environment of a “normal” school. I was as shocked by their old-fashioned sexism and self-satisfied opinions as their utter lack of awareness.

Had they truly no idea that dealing with men would be a walk in the park after navigating societies of young women from the first sleepover to the first hallway huddle to the first inclusive joy that drives dreaded school cliques in the first place? A woman alone may be frightened, but women together can be terrifying.

It’s no accident that Arthur Miller used a case of girls’ hysteria to reflect a very adult danger in THE CRUCIBLE, or Megan Abbott explored the beautiful ferocity of young women in THE FEVER, or Emma Cline revealed friendship to be an equal draw for her Manson-inspired cult in THE GIRLS. Rarely does a writer capture the heft of magnetism, discomfort, and constant vigilance that adolescent female groups demand. In THE SECRET PLACE, Tana French takes up the challenge.

When cold-case Detective Stephen Moran receives a tip from a former witness about an unsolved death, he leaps at the chance to break in to Dublin’s coveted Murder Squad. He and reluctant Murder Squad partner Detective Antoinette Conway head to the scene of the crime, an elite girls’ boarding school, where a handsome student attending the brother academy was found murdered on the grounds a year earlier.

The detectives quickly narrow their findings to two rival groups of girls. These close-knit friends with overlapping loyalties weave a tangled web of lies and secrets that threaten to keep the truth about the boy’s death hidden.

The narrative shifts between Detective Moran’s perspective—an outsider both professionally and in the wealthy, female environment of St. Kilda’s—and the deeply felt connections and experiences of the girls in one of the rival factions. Transferring from internal to external viewpoints highlights Detective Moran’s careful consideration of others’ insecurities and flaws, stressing how careful social dynamics can impact one another in the world. He watches the girls under questioning, noting toward the end of the investigation, “teenage girls make Moriarty look like a babe in the woods.”

The opposing female circles lend the novel an air of “Mean Girls” hostility crossed with John Hughes–like teen justification: the girls seem to dislike one another based on material wealth and physical appearances rather than real personality discord. But French’s illustration of the ineffable bonds and solidarity in adolescent friendship nearly makes up for the superficial characterization. It even inadvertently supports one of the novel’s overarching questions: Do you really need a fully realized external villain when there is potentially one much darker within you?

In the end, THE SECRET PLACE goes wide in scope—touching on Irish class dynamics, privilege, gender clashes, even light supernatural elements—but Tana French’s efforts in capturing the perilous glory and potential of female relationships make this Dublin visit well worth it.

The Secret Place
by Tana French 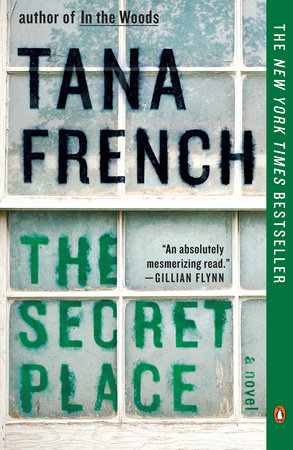 |+| Add to Your Shelf
The Secret Place
Tana French

A haunting exploration of friendship and loyalty from one of our most talented crime writers. The investigation into a handsome, popular boy's murder has gone cold, but when a clue is found at a girl's boarding school, detectives learn that the world of teenage girls can be more mysterious and dangerous than they imagined.