When I worked in a bookstore, the subject of favorite novels came up often among the employees, and the subject of our favorite corresponding BBC adaptations came up just as often. They kind of go hand-in-hand, especially when you read a lot of Victorian fiction.

In our discussion of 1995’s “Pride and Prejudice” (starring a young and brooding Colin Firth), I brought up 2004’s “North & South” (starring a young and brooding Richard Armitage). While my boss and I gushed over it, another coworker inquired to the plot of NORTH AND SOUTH—a novel she had never heard of. I described it as “PRIDE AND PREJUDICE set during the English Industrial Revolution” and recommended she check out the miniseries. She did and watched all four hours in one sitting.

I admit it’s a bit rude to describe a truly engrossing and socially conscious novel as simply a derivative of Jane Austen’s masterpiece. Elizabeth Gaskell, its author, deserves greater recognition, and she is long overdue for it. Unlike Austen, her writing focuses more on the economic differences between the classes rather than the social ones. These differences are also much more stark and distressing; the working poor in NORTH AND SOUTH are starving and desperate for reform. The masters of the Northern industrial city where the story takes place, meanwhile, are struggling to prevent the workers from striking.

Our protagonist, Margaret, is a young country girl from the south of England who finds the grit and grayness of city life dehumanizing. She also finds the taciturn, hardworking, and nouveau riche John Thornton off-putting. And yes, like PRIDE AND PREJUDICE, NORTH AND SOUTH features rejected marriage proposals, family scandals, horrible in-laws, misunderstandings, analyses of gender roles, and a brooding man and a headstrong woman who constantly seem to say the wrong thing at the wrong time to one another.

Where it differs, however, is in its depiction of the upheaval many felt in mid-1800s Great Britain. The Industrial Revolution is as much a character as Margaret, and you can almost smell the soot and smoke of the fictional industrial town of Milton. Gaskell handles the love story beautifully, but she also grants as much gravitas and time to the social aspects of the novel, if not more so.

Be warned; this isn’t the charming countryside of Regency England with empire gowns and country balls. The people who inhabit NORTH AND SOUTH struggle, work hard, and clash with one another politically and economically. Death is a lurking specter that is always right around the corner, and money is crucial for survival. In this aspect, Gaskell harkens more to Dickens than Austen but truthfully, she stands on her own as a competent and evocative author.

Don’t worry, though. There is a happy ending, even after all the despair and struggles our heroine experiences. Life is never easy, Gaskell warns us, but with enough fortitude, we can survive and sometimes even flourish. And it certainly doesn’t hurt to have a handsome, reserved man adore you.

North and South
by Elizabeth Gaskell 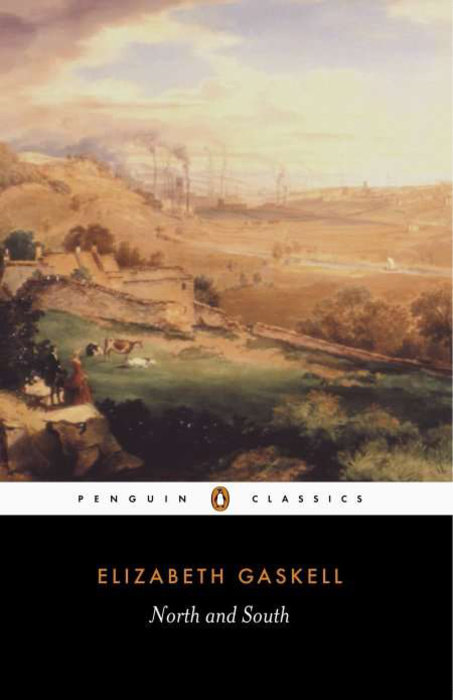 |+| Add to Your Shelf
North and South
Elizabeth Gaskell