Although I had thought that every scene from Shirley Hazzard’s THE TRANSIT OF VENUS was an indelibly stored piece of memory, I’d actually forgotten, over the years, the excruciating brilliance of her writing. I remembered the fact of it but not its haunting reality. Rereading it, I got tears in my eyes on page one—brought on at first by the language itself but then by the way that language brings to life the passions that her characters grapple with, the love they seek in their different ways, the varying degrees of honesty with which they view one another and themselves, the overarching gravity—and horror—of the world they enter on the heels of World War II.

Two Australian sisters, Grace and Caro, orphaned in youth, are raised by a half sister so sharply etched in her self-dramatizing narcissism she might have been created by Dickens. Even as a child, Grace is kind, compliant, and graceful, as if formed by her name, while Caro is more angular in terms of her beauty and character.

When they escape the mantle of their half-sister’s control for the first time, they almost immediately encounter the men who will subsume their lives: Paul, a budding playwright from London, and Ted Tice, a brilliant scientist, both of whom fall in love with Caro; and Christian, who is smitten with Grace. The impressions these fledgling adults make on one another, their (sometimes false) assumptions, the apparently unbreakable ties they form in response to passion, seem as random and patternless as we assume our lives to be.

But what happens to them over the course of their lives—in London and in far-flung reaches of the world—seems, by the end, less random than destined, an impression heightened by the book’s structure and plot. Because plot there is, despite the rapturous love stories that render characters (and reader) nearly oblivious to looming reality. The clever, tough lines of that plot feed the question of destiny that Hazzard has subtly created from the beginning, providing not only a pivotal point around which all lives turn but also the foundation for the many themes that the book considers.

One major theme involves the ways that character can determine destiny: Grace, ever pliant, incurious, passive, seldom demands what she wants or needs and as a consequence leads an unfulfilled life, while truth-telling, risk-taking Caro carves a full life for herself thanks to her curiosity, her openness, her ability to see beneath the surface, and most of all to a determination to be true to herself, whatever the cost. Whatever role fate may play, Caro’s life is comprised of the decisions she has made, the actions she has taken: [the fault] in ourselves, not in our stars.

THE TRANSIT OF VENUS, while grounded in clear-eyed reality—about people and what makes them tick—is as much about ideas as about love, as adept at skewering society as people, as astute about global conflict as about personal relationships. Colonialism, war, power, political corruption, feminism, betrayal and, of course, love are among the many facets of life, whether private or public, that she examines, her skill at narrative and her luminous but precise language fashioning story and themes into a transcendent work of art.

The word sublime, used by critics years later to describe her next novel, THE GREAT FIRE, is an entirely apt description for THE TRANSIT OF VENUS as well. The writing is heart-stopping, hair-raising, the sweep of story hugely engrossing, the result brilliant.

The Transit of Venus
by Shirley Hazzard 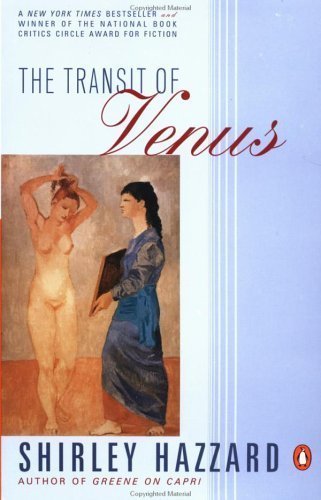 |+| Add to Your Shelf
The Transit of Venus
Shirley Hazzard