In my bookstore, when I pull THE SPIRIT CATCHES YOU AND YOU FALL DOWN by Anne Fadiman off the shelf for a prospective reader, I usually say that it’s my wife’s favorite book ever, which it is, or at least was the last time I badgered her to choose (she doesn’t like declaring favorites as much as I do). But really it’s one of mine, too.

When Lia, a baby girl in an immigrant Hmong family in central California, started having seizures, it was clear to her American doctors what was happening: she had epilepsy. And it was clear to her own family, too: she had qaug dab peg, or the illness in which “the spirit catches you and you fall down.”

The two terms might be seen as mere translations of each other, but, as Anne Fadiman shows in this moving book, the difference in understanding goes far deeper than that and, in Lia’s case, led to tragedy: the state, unsatisfied with her parents’ “compliance” with her medication, temporarily removed her from their care. She later suffered a massive seizure that left her brain-damaged for the rest of her life.

THE SPIRIT CATCHES YOU AND YOU FALL DOWN is a story that might be told as an outrage—directed at either Lia’s parents or her doctors and social workers, or both—but instead Fadiman tells it with such empathy that it seems almost to have been written by its subjects. “Almost” is the important word there, though. Fadiman recognizes the gulf between writer and subject—those gaps in understanding, between cultures, between doctors and patients, and between a reporter and her story, are the very subject of her book—but that doesn’t stop her from trying to cross it, with a humble and respectful doggedness.

As a reader from Fadiman’s Western perspective, you feel at once that you both know the Hmong people she writes about, and also that there’s no way you can fully know them.

It’s a little surprising to step back from the full-bodied mastery of THE SPIRIT CATCHES YOU AND YOU FALL DOWN and realize that it’s the only book-length narrative Fadiman, in her long career as an editor and essayist, has published. Her other books have been mainly about books, and in the essays in Ex Libris, her best-known book aside from this one, she writes about what it’s been like to live a life that in large part has been filtered through reading.

There’s a common stereotype of the obsessive reader as someone who walls him- or herself off from the world, preferring the safety of words to real engagement with what’s outside. On the other hand, there’s also a common argument (made by obsessive readers like me!) that wide and curious reading is one of the best ways to cultivate empathy, to understand people who aren’t like you.

No doubt there’s some truth to each statement, but there may not be any better evidence for the latter—that a life of reading prepares you for, rather than protects you from, a thoughtful engagement with the world—thanTHE SPIRIT CATCHES YOU AND YOU FALL DOWN.

The Spirit Catches You and You Fall Down
by Anne Fadiman 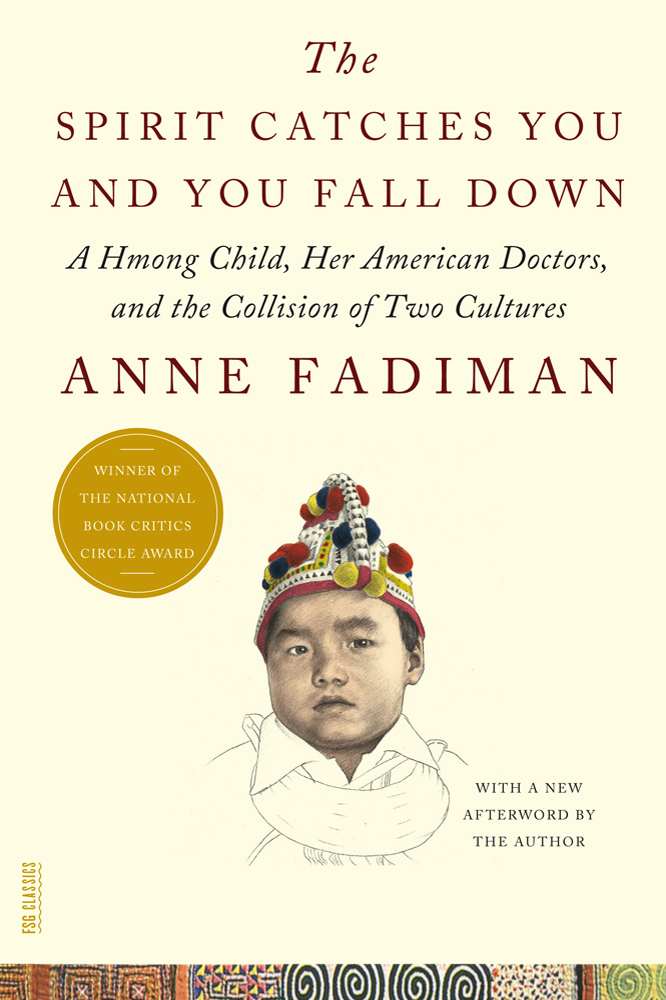 When a young girl is brought into the emergency room, her doctors and her parents, Hmong immigrants from Laos, each have different explanations for what is wrong. What unfolds is a gripping true story of medical drama, culture clash, and the tragic fallout when so much gets lost in translation.

A Full-Bodied Narrative that Cultivates Empathy Like No Other