Though I spent most of my high school and college years writing for newspapers, I never wanted to be a journalist after graduation. I do, however, like reading journalists’ memoirs, which is how I landed on THE TALIBAN SHUFFLE. This high-octane memoir has been made into a film starring Tina Fey, Margot Robbie, and Billy Bob Thornton called Whiskey Tango Foxtrot  and will be in theaters March 4.

THE TALIBAN SHUFFLE covers the nearly five-year period that author Kim Barker worked as a reporter in Afghanistan and Pakistan for the Chicago Tribune. The book follows her as she dodges bombs, cultivates sources, and finds her place in a community of expats, government officials, and other journalists clamoring for the next big story.

What sets this apart from other war stories you may have read? Well, it’s hilarious. Plenty of war and combat memoirs are somber, tragic, sometimes even terrifying. Though Barker doesn’t sugarcoat when she recounts serious events, she isn’t afraid to address the absurdity of being an American woman in a different culture, or of living a reporter’s life, which is constantly changing and often unexpected.

One of my favorite moments is only a dozen pages in, when Barker approaches the top foreign editor at the Tribune in 2001 after learning that the higher-ups are looking to send more female reporters to the Middle East. She had seldom been abroad, only spoke English, and didn’t know much about Islam, but she wanted adventure and an escape from her day-to-day life.

“I have no kids and no husband, so I’m expendable,” she says. The editor nods, and hands her an envelope with her name on it; the paper has already checked out who is single and likely to report overseas. “We know who you are,” he responds. “Get ready to go to Pakistan.”

Less than six months later, she’s on a plane, about to embark on the ride of her life. By day, she covers her head with a scarf and reports on bombings, militants, elections, and is even embedded with the United States military as they’re on patrol—by night, she and her fellow correspondents blow off steam with cheap alcohol and early 2000s jams. There is a dark comedy in these opposite experiences, and this elevates the book from a story of war to a story of life and stepping outside of your comfort zone.

Which brings me to another of Barker’s strengths: while some well-known and high-ranking figures make cameos, she is not a name-dropper. This book isn’t about the headliners, the network anchors, or the cable TV packages. It’s about good old-fashioned reporting, the kind that many fear is disappearing in today’s media landscape. There’s no Twitter, no photo ops, viral videos, or sudden rises to fame. Barker starts from the bottom, and works hard to show the realities of reporting overseas, and the danger that people put themselves in so that we don’t have to.

In my armchair travels, I’ve read a lot of journalists’ tales: this one might just be my favorite. Barker’s journey is enough to make you look at things differently, read the news a little more closely, and maybe even push you try something new. Or if you’re like me, you can just relish the contact high.

The Taliban Shuffle
by Kim Barker 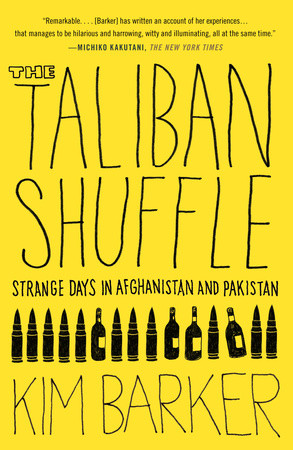 |+| Add to Your Shelf
The Taliban Shuffle
Kim Barker

Kim Barker, a journalist who began reporting from Afghanistan and Pakistan in 2002, tells the absurdities and tragedies of the “forgotten war” in this darkly comic memoir. Tina Fey steps into Barker’s shoes in the film adaptation, (entitled “Whiskey Tango Foxtrot”), and promises to bring humor and humanity in heartbreaking circumstances to the big screen. Release date: March 4, 2016