I first read, and was enchanted by, THE DANISH GIRL by David Ebershoff in the summer of 2014, months before any news about the movie. Now, having seen the film and reread the book, I highly recommend discovering this beautiful depiction of a complex marriage, dynamic love, and finding one’s true identity through Ebershoff’s novel, even if you’ve already seen the film.

Because of the movie, you might know at least the basic story of THE DANISH GIRL. In the 1920s, the main character, Lili Elbe, was one of the first recipients of gender reassignment surgery. The novel follows her path of coming to terms with her own identity: first seeing Lili as a sort of alter ego to her male self—Einar—and later realizing that she was truly a woman. I heard someone whisper to a friend in the theater, “It’s a story about a man who becomes a woman,” but this is ultimately a rudimentary description, particularly in terms of the novel, as it reaches much further.

This novel is more an unusual but powerful love story than a history of gender reassignment surgery. Lili’s relationship with her wife, Greta, becomes the heart of this story, as illustrated in even the first line of the novel: “His wife knew first.” Greta serves as Lili’s greatest supporter, encouraging her to become who she’s meant to be, even as this slowly leads to the end of their marriage. As Greta becomes more Lili’s friend than wife, her loyalty and love remain, and she encourages Lili through her transition. This is the aspect I found the most intriguing about this novel. Greta and Lili’s relationship changes significantly throughout the book, but the love Greta has for Lili remains.

Another aspect of this novel often left out by a basic description is its intriguing glimpse into the twentieth-century art scene in Denmark and Paris. At the beginning of the novel, both Lili (then Einar) and Greta are painters. Einar is known for being a fairly successful landscape painter, while Greta has yet to find an audience. As the novel progresses, though, Lili plays a significant role in Greta’s career, as Greta finds success through her paintings of Lili.

The novel serves as an exploration of the art scene, and Ebershoff masterfully introduces a location and time period foreign to many modern readers. During my first read, I paid more attention to Lili’s half of the story, but reading the novel again, I found it to be a captivating look into a world of art dealers, galleries, and shows. Greta’s advancement in the art world proves to be as interesting a story as Lili’s experiences.

When I left the theater after seeing THE DANISH GIRL, I was a bit disappointed. While Eddie Redmayne gave what may be an Oscar-worthy performance, I believe this story lends itself much better to the written word. The novel allows for a three-dimensional view of the world, giving the complete story of Greta’s success in the art scene while providing a much deeper look into the powerful love that held them together, even as their relationship changed. It stretches well beyond the story of “a man becoming a woman”—instead being an extraordinary and heartbreaking showcase of the relationship and lives of two human beings.

The Danish Girl
by David Ebershoff 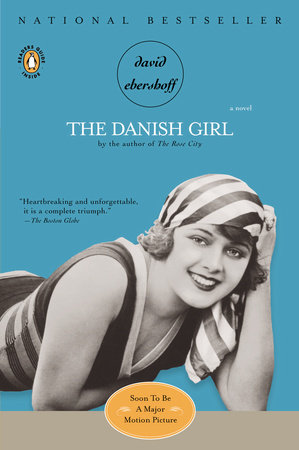 |+| Add to Your Shelf
The Danish Girl
David Ebershoff

Call her Lili, and call this an Oscars shoo-in. Eddie Redmayne plays Lili Elbe, the first recorded person in history to undergo gender-reassignment surgery. If director Tom Hooper’s previous films, The King’s Speech and Les Misérables, are any indicators, this drama promises to be just as moving as its ink-and-paper counterpart.

A Groundbreaking Love Story of Art and Identity