When I was a kid, on Friday afternoons my dad would always take me to our local Blockbuster video store (remember those?), where I was allowed to rent one movie and one video game for the weekend. Although picking just one game was serious business to my ten-year-old self, by Saturday midday I would usually lose interest and abandon my Nintendo console to curl up with a book or bake cookies with my mom.

So when my book club chose Ernest Cline’s READY PLAYER ONE, which my friend described as “a really awesome novel that’s sort of about video games,” I wasn’t excited. But when I finally picked it up,  I discovered that READY PLAYER ONE isn’t just a book about video games—it’s a hilarious, rollicking joyride through ’80s pop culture featuring a big-hearted protagonist that you can’t help but root for and his epic quest for fame, wealth, and love.

In the dystopian near-future, our hero, eighteen-year-old loner Wade Watts, must overcome seemingly insurmountable obstacles in his search for a billion-dollar fortune hidden inside a massive online virtual world called the OASIS. But just as Wade thinks he’s close to the ultimate “Easter egg,” he discovers that the game clock is running out of time and a clan of corporate drones is hot on his heels, both in the game and IRL (in real life).

While the arc of READY PLAYER ONE is that of a classic quest-style video game, you don’t need to have ever picked up a controller to adore this book. Ernest Cline’s OASIS is a strange and wonderful place, stocked with a dizzying array of planets, methods of transportation (fancy driving to school in a DeLorean?), avatars, magical spells, and virtually life-threatening situations.

To add another layer of fun, the creator of the OASIS was obsessed with the 1980s of his youth, so the novel is a rich, satisfying love letter to the decade as Wade combs through the pop-culture archives searching for clues to help him on his quest. The Atari game Space Invaders, all 180 episodes of Family Ties, Dungeons & Dragons rule books, John Hughes’s oeuvre of teen flicks, the Star Wars trilogy, the complete discography of Devo, and more become texts for Wade to analyze and revere, much to the delight of any reader who looks back on the decade wearing rose-colored (sun)glasses (at night).

Cline is an awe-inspiring vault of ’80s trivia and miscellany, and from the novel’s opening pages to its intense, action-packed finale, he expertly weaves his knowledge into the story in a way that’s somehow both deliriously entertaining and also integral to the plot.

Wade’s journey moves the plot along briskly, but even as he’s slaying monsters, zooming around galaxies in his spaceship, and donning magical armor, it was the emotional connection that I formed with his character that kept me reading. Despite the high stakes, Wade’s definitely a teenager, one with a wickedly sarcastic sense of humor and a compulsion for quoting his favorite movies, but also an empathetic streak that keeps him grounded even as the vast fortune comes within reach. His interactions with his best friend, Aech, whom he’s only met in the virtual world, feel completely authentic and real, whether they’re discussing how to stop the corporate gamers in the world outside of the OASIS or battling each other at yet another round of an obscure coin-operated arcade game.

To talk too much about Wade’s cyber-crush, the very badass blogger girl Art3mis, would give away one of my favorite parts of the book, but I’ll just say that I was pleasantly surprised by Cline’s deft ability to convey the awkwardness, excitement, and general warm-fuzziness of a new teenage romance. I’d like to think that Cline rewatched my favorite of John Hughes’s movies, the Molly Ringwald classic Sixteen Candles, when writing those scenes. And I definitely think that Hughes, along with the other filmmakers, game developers, musicians, and creators whose works are so lovingly catalogued throughout the novel, would be honored by the homage.

Ready Player One
by Ernest Cline 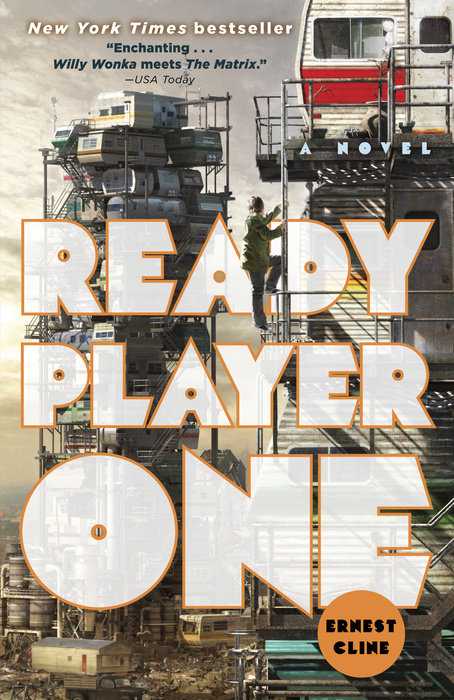 |+| Add to Your Shelf
Ready Player One
Ernest Cline