Mona Gray is a quitter—and she’s proud of it. Unlike most of us, who are so fixed in our routines that we become afraid to abandon a dead-end job, a failed pursuit, or a waning love interest, Mona relishes in letting go of even the brightest aspects of her life. She quits dessert just to see if she can. She stops running track, even though she’s a star. She quits boyfriends and piano and even egg salad. For her, quitting is a bonsai-like art: just as something new and promising begins to take root and grow, she chops it away and discards it.

It is fitting, then, that for Mona’s twentieth birthday, she buys herself an ax, symbolizing her unusual, obsessive desire to destroy and to break with reality. Even stranger is that she decides to hang it on the wall of the grade school classroom where she teaches. The ax ominously haunts the rest of the novel, threatening to sever the delicate ties Mona is forming with the people around her. It is in this way that An Invisible Sign of My Own uses its core of magical realism and its unlikely course of events to create one of the most surprisingly relatable characters in fiction.

Admittedly, some readers struggle to see the universal in Aimee Bender’s very particular characters. While Mona’s specific situation is a bit beyond reality, her feelings aren’t. You might wonder: What can the typical reader expect to have in common with an off-kilter elementary school teacher who obsessively knocks on wood for luck, processes equations in her head, sends her second graders on a hunt for numbers in the wild, and gnaws on bars of soap to condition herself against loving things?

But the beauty of An Invisible Sign of My Own is how easy it is to identify with Mona both in spite of and because of these oddities. Her father’s illness is what causes her to detach. Her superstitions and obsessive practices get her through the day. Patterns in life and nature help her to find pathways through a world that is closing in on her. She fantasizes about new ways to lose, perhaps because it protects her against future heartbreak. Her skillful ability to sever ties empowers her, but often incapacitates her when facing new opportunities, like meeting the handsome science teacher at school. And while the specifics may vary, all of us have endured loss in some way.

Aimee Bender’s imaginative and well-crafted narrative lends a fresh and lovely perspective to topics that might otherwise be seen as tired or trite. Through Mona, we are forced to face our own personal fears, our inabilities to connect, our losses, and our hardships, and examine the ways in which we avoid or confront them. With its colorful prose and unusual storyline, An Invisible Sign of My Own has an incredible way of getting under your skin; years later, you’ll still be remembering Mona’s story, but with a catch—you’ll reflect on it almost as if it were your own.

An Invisible Sign of My Own
by Aimee Bender 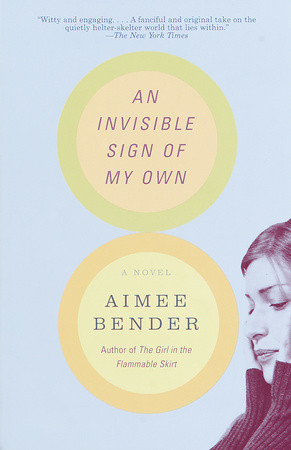 10 Family Novels as Warm and Fuzzy as Your Favorite Sweater

5 Workplace Thrillers to Make You Miss Your Office (or Not!)