We all like the familiar. As often as people chant “Change is good,” we really only like to make small deviations in an otherwise static existence. I’m the first to admit that I am stubborn and can easily get stuck in my ways, but I can’t hold a candle to A. J. Fikry and his stable, steady life at the beginning of THE STORIED LIFE OF A. J. FIKRY by Gabrielle Zevin. And this book, charming and loving and warm, reminded me why change, scary as it may be, is ultimately and usually a good thing.

This delightful novel opens with thirty-nine-year-old A. J. Fikry grieving over the death of his wife, a woman who kept him on his toes while helping run Island Books, the small and offbeat bookstore on an island off the coast of Massachusetts. His bookstore suffers, and when he learns that the familiar sales rep from Knightly Press has also passed away, he takes out his anger and discomfort on the new sales rep, who was only trying to sell him her favorite book from their winter list.

A. J. tries to isolate himself from everyone, but that proves impossible. As tends to happen when you least expect, events are set in motion through choices made by the community that surrounds him. Strange occurrences, such as the disappearance of his prized book of poems by the late Edgar Allan Poe, and the even more strange appearance of a young toddler whom he adopts (I know it sounds crazy, but go with me here), left behind by a mother who wanted her daughter to “grow up as a reader,” force A. J. to learn how to adjust to his surroundings. And as he begins to see the community around him for the first time, Island Books and its owner are both changed irrevocably and definitely for the better.

One of my favorite things about this book is its title.THE STORIED LIFE OF A. J. FIKRY is exactly right for A. J.’s life, which is not a grand narrative or an epic plot but instead a series of moments that range between heartwarming and heartbreaking and will sweep you off your feet. The title perfectly denotes the kind of experience you are about to have. As you begin reading, A. J. is stubborn, stodgy even, acting much older than his age. He scorns the cards life has dealt him and believes that his life is one long and tumultuous novel of which he can only be in the middle. He is bored and wants nothing to do with his surroundings. But once Maya (the little girl left in his store) enters his life, he allows his own story to change, and he puts himself back in the narrative of his community.

Within this community, the cast of characters are undeniable in their appeal, and you delight as A. J. welcomes them one and all into his world and, more specifically, into his store. You will feel yourself grow lighter as you witness his adopted daughter grow up in a world filled with all kinds of people, from the overprotective cop to the gossiping but well-meaning mothers and grandmothers.

THE STORIED LIFE OF A. J. FIKRY is an incredibly fun read. You don’t want to put it down because you love the feeling you get while reading about the trajectory of A. J.’s life as it begins to blossom. His change of mind (and of heart) comes across as justified and natural, and by the end, you yourself are ready to embrace the new, the scary, and the unfamiliar. There’s a line from a musical that I love, and I think it applies here: “If life were only moments, then we’d never know we had one.” Gabrielle Zevin collects life’s greatest moments and binds them into a very well-lived storied life of a man who kept himself open to whatever it brought.

The Storied Life of A. J. Fikry
by Gabrielle Zevin 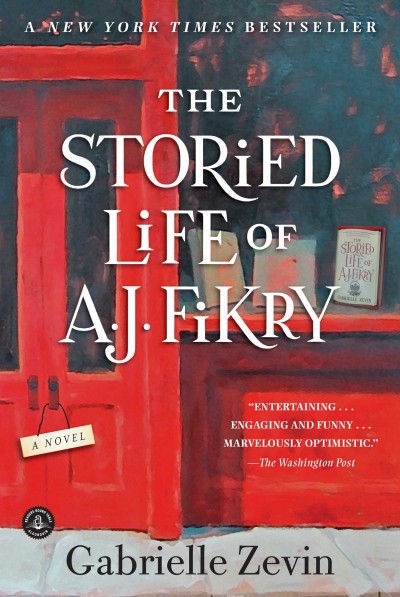 |+| Add to Your Shelf
The Storied Life of A. J. Fikry
Gabrielle Zevin

A.J. Fikry’s life is not going according to plan. Unmarried, alone, and running a bookstore on the brink of collapse, he has just discovered that one of his most prized possessions, a rare folio of poems written by Edgar Allen Poe, has been stolen. But when a mysterious package appears one morning at the store, its unexpected arrival gives him the chance to see everything anew.