One of the things I sometimes hear readers say about my first book, KITCHENS OF THE GREAT MIDWEST, is that, based on the cover and the title, they expected something different. Some readers anticipated more recipes—or wanted a book of all recipes. While I hope they were at least slightly amused at the book they discovered, I know where they’re coming from. As an avid reader, I also sometimes experience some dissonance between the tone I feel was implied by the title or cover and what I perceive within the pages, and I believe I experienced that most strongly with Gina Frangello’s excellent A LIFE IN MEN.

This is not a knock on either the title or cover, which features a bikini-clad young woman, viewed from behind, the wind tossing her hair as she faces a sun-washed ocean, right arm raised in either celebration or happy salute. Bring on the beautiful men I won’t remember, it seems to say; black me out on umbrella drinks and wash me ashore gloriously spent and no worse for wear.

The book I found within this cheery package, however—a thoughtful, elegiac, time- and country-hopping emotional epic about female friendship and mortality—is, to me, a substantially dark and meditative story that only in moments captures bright joy and breezy romantic ephemera. Mary, the narrator, and Nix, her best friend, are copiously worse for wear from a drunken vacation fling, and each spend the rest of their lives reacting to this shared and unaddressed fact.

The novel is also beautifully and wisely written; arguments like “twenty-two-year-olds do not feel as unformed as they are” pop out of quotidian situations; phrases like “the perfection of the small blows” describe an oft-used medical procedure. It’s also splashed with explicit sex and young people acting impulsively and ill-advisedly. I’d even almost call it a “fun read” but for its unmistakably dark and portentous core. Emotionally, it’s a bit like a booze cruise cast into a blinding and anxious haze.

Although Mary’s relationships with men, few of which are truly ephemeral, is her way of marking time through the tragic flotsam of an intense friendship, the men are certainly never the focus; it’d be like calling WHO’S AFRAID OF VIRGINIA WOOLF? “A Life in Highball Glasses,” perhaps. As a reader, the fractured hopscotching through time and space—and men, as it were—felt like the milieu for an internal emotional extirpation of the whys and hows behind an irretrievable loss. Mary, who does eventually settle down with a man, remains perpetually unsettled, and her quest to resolve the unresolvable is at conflict with a stark and encroaching expiration date.

I’ve read few books that explore a platonic friendship to these intense and moody depths. Anyone who’s lost a friend for reasons they can’t understand, or has left a situation with a loved one hurtful and incomplete, will find their thoughts and actions mirrored in these young characters, who are only just developing the emotional sophistication and experience to handle the corrosive trauma lodged in their memories.

Yet Mary’s attenuated life of loss and longing encounters growth, hope, and wisdom like a detective unearths evidence, aptly demonstrating the heartbreakingly piecemeal experiences that result in maturity. As Frangello follows her complex young narrator to death’s observation deck and back, she ultimately finds, as we all do, that death is less about the dying than the survivors, that guilt’s amortization has no honest schedule, and that it’s the things we never said that end up mattering the most.

A Life in Men
by Gina Frangello 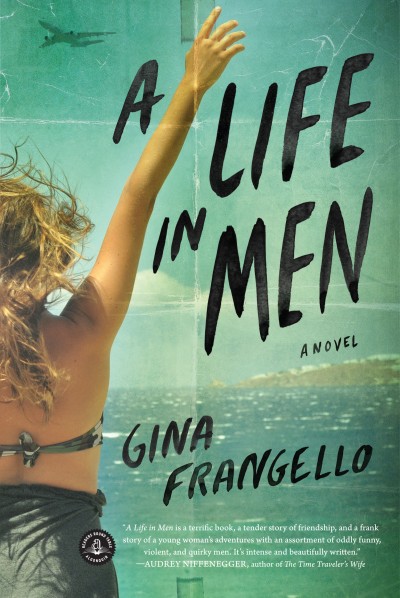 |+| Add to Your Shelf
A Life in Men
Gina Frangello