THE WORLD ACCORDING TO GARP was published in 1978, my freshman year at a high school not unlike the one attended by John Irving’s title character, T.S. Garp. I don’t remember which year I read it, but it was the summer, and I finished it late at night, in the corner of the couch in our living room, in tears. I had lived a lifetime through generations of Garps and I did not want to leave them.

The novel filled me with such awe and appreciation of writers and writing that I sought to emulate Garp’s dedication to his craft. (I wrote newspaper columns in high school and college called “The World According to Karp.”) T.S. Garp was the kind of author I wanted to read: he was both serious and humorous. “Garp felt most people confused being profound with being sober, being earnest with being deep,” Irving writes. “Garp believed that laughter was related to sympathy, which we were always needing more of.”

My favorite character in the novel is Jenny Fields, Garp’s mother, a nurse with little tolerance for social conventions. In her memoir, A SEXUAL SUSPECT, Jenny writes, “I wanted a job and I wanted to live alone. That made me a sexual suspect. Then I wanted a baby, but I didn’t want to have to share my body or my life to have one. That made me a sexual suspect, too.” Jenny Fields conceives Garp in a singular way. I’ve never read a more imaginative conception scene. Read it yourself, if you haven’t already. (It’s the first chapter of the book and the epitome of starting with a bang.)

Discovering the sexual suspects in THE WORLD ACCORDING TO GARP, I was introduced to an affirming world of alternative sexuality at a time when such views were far from the mainstream. For a teenager who didn’t yet know whether he was gay or bisexual or just unusually curious, there was much solace and communion to be found in the lives of John Irving’s characters. Decades before Caitlyn Jenner or TRANSPARENT, John Irving gave us Roberta Muldoon (formerly Robert Muldoon, once a professional football player), one of the most memorable trans characters in popular fiction.

Garp was also ahead of its time in its depiction of radical activism, best illustrated by the Ellen James Society, a group of women who voluntarily cut out their own tongues in solidarity with an eleven-year-old rape victim. Through the years, the Ellen Jamesians have become so real to me that I’ve had to check reference sources to make sure they didn’t actually exist, and to confirm that John Irving made it all up. (He did.)

Approximately thirty years after first reading John Irving’s work, I had the good fortune to become his editor. One reason John chose me was because the novel he’d just written, IN ONE PERSON, was also about sexual suspects, and he thought I’d appreciate it. I did, fervently.

Around the same time, I was expecting the birth of a son. As a single parent, I owed a debt to Jenny Fields for showing me the way. I told John I was thinking of naming the boy T.S. Karp. A look of horror came over John’s face. “Oh, no!” was all he said. Ultimately, I chose another name.

I did come across one passage where I know John Irving disagrees with Garp. When Garp is struggling to write his next work, he entertains notions of becoming a marriage counselor because “art doesn’t help anyone.” Irving writes that Garp “rejected the idea that art was of any social value whatsoever—that it could be, that it should be. The two things mustn’t be confused, he thought: there was art, and there was helping people.” But I know very well that the author of THE WORLD ACCORDING TO GARP (and THE CIDER HOUSE RULES, and A PRAYER FOR OWEN MEANY, and IN ONE PERSON) is clearly of the opinion that art can and does help people.

John Irving’s novels have helped me enormously. They opened me to a world I’d only barely begun to understand and appreciate. They exposed me to the wonders of an unconventional path. They are the greatest personal evidence I can cite to prove how profoundly art can influence and enrich lives.

The World According to Garp
by John Irving 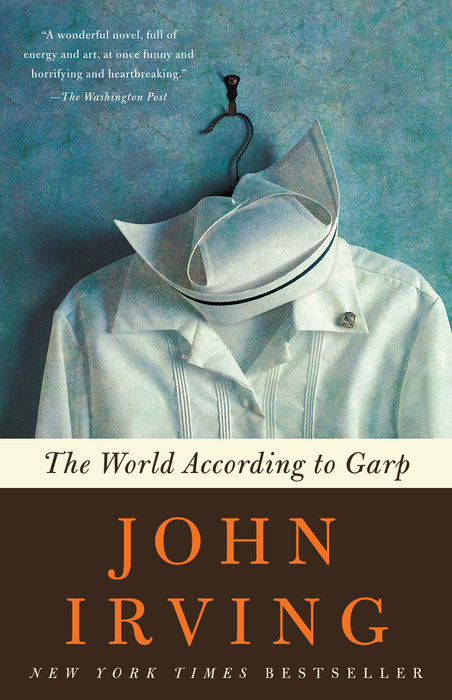 Notice: Trying to access array offset on value of type null in /home/offtheshelf/public_html/web/app/themes/ots/_inc/template-parts/books/book-modal.php on line 31
|+| Add to Your Shelf
The World According to Garp
John Irving

Here are the life and times of T. S. Garp, the bastard son of Jenny Fields, a feminist leader ahead of her times. Here are the life and death of a famous mother and her almost-famous son; theirs is a world of sexual extremes, even of sexual assassinations. The World According to Garp is a novel rich with "lunacy and sorrow", yet the dark, violent events of the story do not undermine a comedy both ribald and robust.