While I was on a whale watching trip this summer, a nearly fifty-foot whale gracefully slipped out of sight under the boat. For a moment I paused in my frantic picture taking. What happens if the whale comes up under us? Thankfully, the whale moved on to feed and spout with its companions. The experience that day brought to mind In the Heart Of The Sea by Nathaniel Philbrick, which tells the incredible story of the Essex, a whale ship that sailed out of Nantucket in 1819. Far from home in the South Pacific, the ship and her crew had a deadly encounter with an enormous sperm whale that tested the limits of the men and forced them to take actions to survive that are horrifying. Of the twenty-one men who sailed from Nantucket harbor, only eight returned. They are notorious for surviving, and notorious for how they survived.

Philbrick is a brilliant storyteller. He breathes life into history as he recounts the experiences of these men who left their homes and families for up to two years at a time to hunt, kill, and fill barrel after barrel with whale oil. Philbrick effortlessly weaves natural history, biology, original documents, and enormous amounts of research into a compelling tale of the captain and crew of the Essex, the sea, and the whales they hunt (literally to the ends of the earth) in order to fuel the demand for oil to light the lamps and lubricate the machinery of New England and the world.

The men of Nantucket battled to remain the leaders of whaling in New England. Ever searching for new locations to hunt whales, they pushed on through storm and calm alike. A crew must work together to be successful. The men of the Essex were unified when they were searching for whales, but that unity was sorely tested when they found themselves the victims of a whale’s revenge. With the Essex sunk, they had to find a way to survive with little water or food and no land in sight.

Ironically, in order to avoid islands where they feared cannibals lived, they set course for South America. It was an enormous undertaking considering the size of the boats they were in and the distance they needed to cover. After weeks at sea, and faced with certain death, they made the decision to eat their companions who had died. It was a choice that haunted the survivors to the ends of their lives.

Philbrick paints compelling portraits of the men who sailed out in the Essex and those few who returned. Winner of the National Book Award, In the Heart of the Sea is an amazing story of man versus nature, man versus man, and man versus himself. It is no wonder that Herman Melville used the sinking of the Essex as an inspiration for his masterpiece Moby Dick.

Philbrick’s telling of the wreck of the Essex inspired Ron Howard to create a movie based on the book, which is scheduled for release in December. I’m predisposed to think the book will be better than the film (the scope of the book allows for forays into whale lore, history, and more). However, I will be very interested to see how this survival story plays out on the screen.

Sheila Curry Oakes is a writer and editor who specializes in nonfiction.

In the Heart of the Sea
by Nathaniel Philbrick 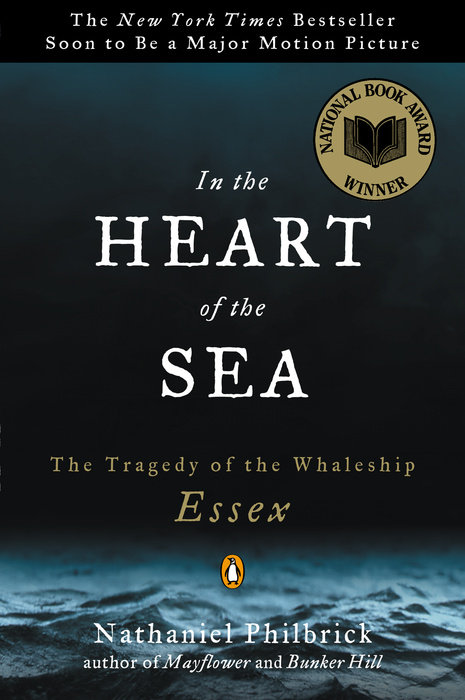 Based on the true events that inspired Moby Dick, Ron Howard’s latest project follows a sunken whale ship whose crew is stranded at sea for ninety days, in a story of incredible courage—and unthinkable sacrifice. Chris Hemsworth puts aside Thor to play a different kind of superhero: the ship’s captain who refuses to give up.