About a month ago, there were two things that I considered to be steadfastly and unavoidably true. The first was that I loved Matt Damon. The second was that I had a feeling significantly less than love for science fiction. Which is why, when I saw the trailer for the upcoming film The Martian, based on Andy Weir’s bestselling novel and starring my beloved Will Hunting, my heart sank. I make it a rule to read the book before seeing the movie—but was I ready to venture into the unknown territories of genre and space? I decided to put on my big-girl space pants and try.

After doing so, I’m here to tell you this: that now, two things are steadfastly and unavoidably true. I love Matt Damon, and I have a feeling significantly more than love for science fiction.

THE MARTIAN tells the story of Mark Watney, an astronaut who is part of a manned mission to Mars in a future that doesn’t seem too far off from today. He’s a well-liked, all-American botanist whose role on the crew is to study and sample the dirt and organisms they might find. The problem? A dust storm forces the crew to evacuate, and Watney’s left behind because they think he’s been killed. The bigger problem? He’s not dead, just unconscious, and now he’s left behind on Mars, alone, unable to make contact with NASA or anybody on Earth. All he’s left with is damaged machinery and the shelter they set up before the storm hit. Using what he has, and what he knows, he sets out to survive.

What drew me in right away were the opening lines: “I’m pretty much fucked. That’s my considered opinion.” I laughed out loud. This was not what I thought a book labeled “science fiction”—even “literary science fiction”—would be. The science parts of the book were complex, but not complicated. Even this humanities-heavy reader could understand what was going on most of the time, which is a triumph in and of itself. The narrative is strong; the emotional resonance even more so. Mark is tough and smart, but also frustrated, and shocked, and scared. In short, he’s human.

THE MARTIAN is about a lot more than space and science, and that is why it is special. It’s about resilience, determination, intelligence, innovation, and never leaving a man behind. It’s also about politics and bureaucracy and how the world responds to tragedy. Not since WORLD WAR Z (which I did a close, geopolitical reading of in college) have I read a book that so blatantly yet so understatedly examines the world we live in. It will make an incredible movie, but I honestly don’t think that anything could compare to the experience of reading it on the page.

Moral of the story? Try something new. Seek out uncharted worlds. Be unafraid of the unexpected. That,THE MARTIAN reminded me, is the reason we read.

The Martian
by Andy Weir 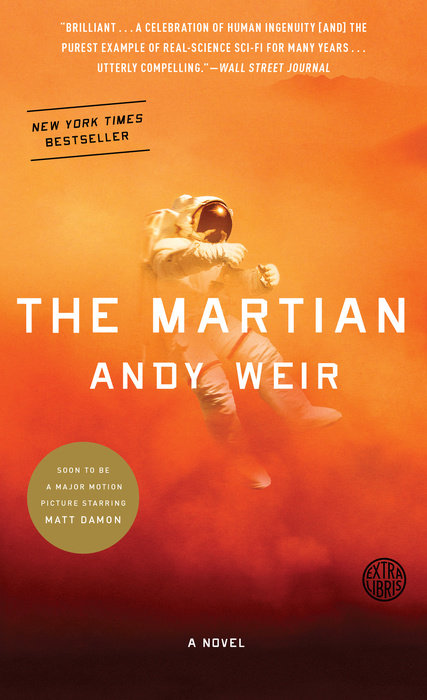 |+| Add to Your Shelf
The Martian
Andy Weir

Stuck on Mars after a space mission gone awry, astronaut Mark Watney makes a desperate bid to survive despite near-impossible odds. The adaptation stars Matt Damon, who has some experience with stranded spacemen—he was in Christopher Nolan’s Interstellar just last year. But don’t get the two tales confused: according to Damon himself, The Martian is “totally f****** different.”