When my parents purchased a home on Long Island, it felt like another gold star to our “pursuit of happiness” scorecard. We too were in a spirited pursuit of the all-American dream home: bedrooms with private bathrooms, pockets of burgundy garden mulch encasing a pristine lawn in a quiet suburban neighborhood. It amazes me whenever I pick up House of Sand and Fog by Andre Dubus III how this very pursuit can bring out the ugliness in people, unearthing surprising truths and resulting in dire consequences.

House of Sand and Fog is a tour de force of Shakespearean consequence in which you’ll empathize with and loathe both sides. Decorated Colonel Massoud Behrani, formerly of the Iranian Air Force, is now a day laborer in California. Even with just $48,000 left from his esteemed career in Iran, some of which he’s marked for his son’s college education, Behrani steadfastly presents the façade of being “well off” at his wife’s wishes: he foots the bill for his daughter’s elaborate nuptials and the lavish apartment his family more than comfortably resides in. As his life savings dwindle, Behrani decides to bid on a humble foreclosed home where he hopes to plant some familial roots in America and finally restore his dignity.

Kathy Nicolo, the owner of a home that has been in her family for generations, is a recovering drug addict whose husband has left her. Due to a clerical error, her home has been taken from her and accidentally sold to Behrani. Kathy does everything in her power to regain ownership, but as she grows more desperate her actions act as a catalyst for a string of events with calamitous results.

At the surface of House of Sand and Fog is an important question: what is home ownership, the cornerstone of the American dream, worth? However, the book is marbled with elegant passages that bring to light the heart and complexity of its characters and effectively allow the reader to sympathize with both Behrani and Kathy. Dubus intelligently laces the text with imagery and ideas that confront prejudice and sexism, and the moments where the tension builds sent me into a tailspin of emotion. House of Sand and Fog does everything you’d expect a great book to do: tug at your emotions and challenge your views.

House of Sand and Fog
by Andre Dubus III 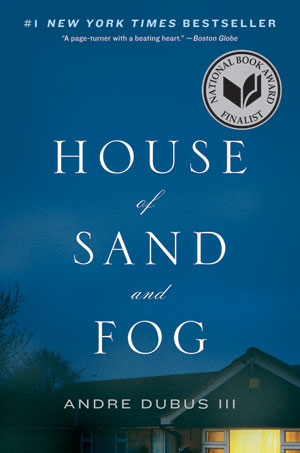 In this masterpiece of American realism and Shakespearean consequence, Andre Dubus III's unforgettable characters—people with ordinary flaws, looking for a small piece of ground to stand on—careen toward inevitable conflict, their tragedy painting a shockingly true picture of the country we live in today.

Excited for the Big New Books of Fall? Read These 14 Novels First!

10 Cross-Cultural Novels that Illuminate the World We Live In

A Novel that Explores the Dark Underbelly of the American Dream