As an associate editor at Emily Bestler Books, I have a wonderful list of authors, all of whom I adore. They’re moms, and former military, and screenwriters, and Australians, and stay-at-home dads. They live in cities and in the country; they are male and female; they’re tall and short and in-between.

But only one of those authors is my personal hero.

I’ve been a fan of ballerina Misty Copeland since I first discovered the world of New York ballet. I was sixteen, and it was the first summer I was interning in New York City. My wonderful godmother, Marty, was kind enough to take me to the ballet nearly every week. I’d danced a little as a child, but now my eyes were opened to the magnificence of this art form. I was enthralled with it all. I studied the choreography. I returned to ballet class. I developed the kind of strong opinions about principal dancers that most people reserve for the Yankees’ starting lineup. I idolized the men and women who brought ballet to life for me. But there’s no denying that ballet is a largely white world. When I sat in the audience at Lincoln Center, there were few faces that looked like mine, whether onstage or off. There were no brown girls.

Until I discovered Misty.

Until recently, Misty Copeland was a long-serving soloist at American Ballet Theatre and the highest-ranking African-American woman to dance on the stage of the Metropolitan Opera House. The first time I saw her dance, my heart soared. Here was a woman who looked like me, like my sisters, like my friends. She was artistic, graceful, strong. It’s hard for me to articulate all of the things she meant to me, but suffice it to say that in that moment I felt like I belonged: like I deserved ballet, and like it deserved me.

Flash forward seven years from that summer. I was an editorial assistant at Touchstone Books, in my first year in my first job, when I emailed Misty to ask her if she might be interested in writing a book about her life. I honestly never imagined she’d write back! I remember how nervous I was the first time we met, but she was so gracious and kind—everything I had hoped she’d be—that I was immediately put at ease. Working with her and her cowriter, Charisse Jones, was a dream come true.

It was amazing to hear her talk about her unconventional entrée into the ballet world through the Boys and Girls Club, and the hardships and blessings she encountered. Her path to finding her art was rocky, as she came to ballet at the late age of thirteen from an impoverished background, and then experienced heartbreaking family struggles that nearly caused her to quit dancing.

I’ll never forget a particular visit she made to the office to work on Life In Motion. We were working together in a conference room, and I asked her what she meant by a certain ballet term. She stood up at the table and immediately began demonstrating her port de bras and tendu routine. Oh my God, I thought. I’m getting a private performance by Misty Copeland.

When I think about the things I’m most proud of, helping to bring Misty’s life story to thousands of readers is one of the achievements that tops the list. I know I’m her editor and it sounds cliché, but her example of continually defying expectations, going after what she deserves, remaining devoted to her passions, and dedication to passing along what she’s learned is a daily inspiration.

On June 30, 2015, Misty made history by becoming the very first African-American female principal dancer in the American Ballet Theatre’s seventy-five-year history. It’s amazing to think it took us this long to get here, but I’m so glad to be living in a time when the most famous face of American ballet is a young black woman—a black woman, like me. And I might be biased, but I think there’s no better person to fill those shoes than Misty.

Megan Reid is an associate editor at Emily Bestler Books.

Life in Motion
by Misty Copeland 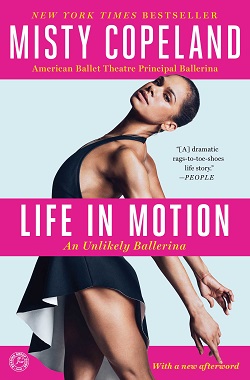 |+| Add to Your Shelf
Life in Motion
Misty Copeland