There are countless reasons to turn to the work of Cormac McCarthy, not the least of which are the astonishing beauty and originality of his prose, his synthesis of an entire civilization’s myths about itself, and his unerring insights into human psychology. One doesn’t typically turn to McCarthy, however, for the milk of human kindness. McCarthy’s outlook is as remorseless as the natural world, where survival of the fittest is the only rule that applies. There are exceptions, of course: The Road; parts of Suttree and All the Pretty Horses. And then there is Child of God, a disturbing novel with a fierce ambition. McCarthy does something nearly impossible in this book: he generates sympathy for and identification with—at least for a while, anyway—serial killer Lester Ballard.

McCarthy takes advantage of the reader’s tendency to identify with a book’s main character. The only way a sympathetic response is even possible is that we know Lester before he is a killer, and we see the role his accidental discovery of a pair of dead bodies plays in what eventually becomes a killing spree. The story is told retrospectively, after all the depravity has taken place, through the interwoven memories of a handful of townspeople around whom Ballard grew up. They see him as deeply disturbed, a man-child, nearly incapacitated by his mental deficiencies, his thoughts opaque and unknowable in the extreme, profoundly sociopathic and eventually psychopathic, but they never see him as anything but one of their own gone wrong. The memories of him they recall in attempting to come to grips with his monstrosity cast him as a repository of their shared and flawed history. Through their eyes, the reader begins to identify with him. It is as if their attention, good or bad, is enough to humanize him.

McCarthy emphasizes the similarities between Ballard and the rest of humanity. He gives him the trait of an unconquerable curiosity. As long as Ballard is watching the world, trying to figure out its mysteries, we are curious to see the world through his eyes. The reader yearns to stop him before he turns to violence, but there is no such consolation in McCarthy’s universe.

Much as we might like to call Ballard’s behavior “inhuman,” it is crucial to understanding Child of God to realize that McCarthy underscores how very human it is. No species has wrought as much violent destruction as man. Ballard may be the worst of what we are capable of, but he belongs to us, and, like the townspeople, we must own what he’s done.

And yet there is no relativism in this scarifying work. In murdering, Ballard crosses a divide into an otherness that normal people can’t fathom. He leaves the family of man. McCarthy is drawing a line between being a human, period, and being “human” in the Enlightenment tradition of humanism. If we are disgusted that a creature like Ballard could even exist, it is up to us to continue to uphold the values that deem him a scourge.

McCarthy’s work suggests that morality begins in the understanding that ties of friendship or family must break down in the face of true monstrosity. McCarthy sees that those most empathetic to our actions are also those best equipped to pass judgment on us. We live and die by those who know us best. The townspeople are the equivalent of the brother of the Unabomber, Ted Kaczynski, who turned in his own kin. The bonds of civilization hold.

There isn’t redemption in this book, but there is a kind of consolation one can take in McCarthy’s ability to see so clearly into the hearts of Lester Ballard, Chigurh in No Country for Old Men, or the Judge in Blood Meridian—men who have stepped outside the strictures of civilization. McCarthy spends a great deal of time in the heads of psychopaths, misanthropes, and megalomaniacs, and there is a quality of self-sacrifice in this endeavor. He is shining a light into the darker recesses of human nature, that we might know ourselves with greater clarity, and keep the fire of civilization burning.

Matthew Thomas is the author of the acclaimed debut novel We Are Not Ourselves, which is now available in paperback.

Child of God
by Cormac McCarthy 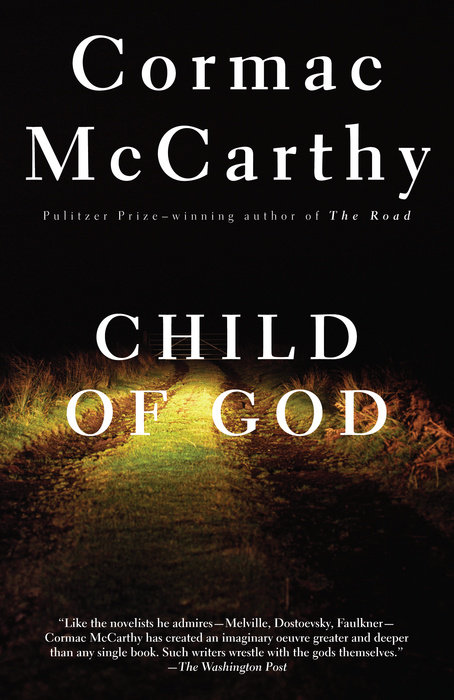 |+| Add to Your Shelf
Child of God
Cormac McCarthy

Tell About the South: 11 Southern Gothic Tales You Need to Read

An Underappreciated and Unrelenting Novel From An American Master