I don’t think it is much of a stretch to say that narrative voice is the single most important element in fiction. Let’s call it some ephemeral mixture of tone, timing, sensibility, word choice, and thematic vision; when these successfully coalesce, they create an unseen yet hugely powerful psychic entity that beguiles and welcomes the reader into that willing suspension of disbelief that makes novels, and what happens in them, not only possible but plausible and even inevitable.

Whenever I teach a writing class, I usually spend a lot of time talking about this ever-elusive concept of the narrative voice. I liken it to a figuratively invisible hand that guides the reader into the emotional and physical landscape of the book, and leaves that reader confident that he or she is in good hands and will not be betrayed. I also take pains to point out what narrative voice is not: it is not a particular point of view in any given scene or chapter; it is not a character’s voice, no matter how distinctive; it is not a plot device; most of all, it is not an authorial presence. In fact, perhaps the most salient characteristic of narrative voice is the actual author’s complete invisibility. The narrative voice, of course, belongs to its author, but is in fact its own separate identity, leading the reader step by step into the fictional world that belongs to that book and is an integral part of it.

I came to these ruminations recently after I finished reading Jess Walter’s truly fantastic novel BEAUTIFUL RUINS. To say that it has a convoluted plot would be something of an understatement. It begins in 1962 and it ends forty years later; there are at least twenty main characters and more subplots that one can count; it moves from Italy to Hollywood to Edinburgh and to many points between and beyond; characters range from the fictional young and naive Cinque Terre innkeeper Pasquale to the (also fictional) beautiful starlet Dee Moray, who when we meet her is pregnant by the very real Richard Burton (the “beautiful ruin” from whom the novel takes its name), who in turn is on site in Rome shooting the movie Cleopatra with Elizabeth Taylor. There is a scene of a pitch meeting for a movie about the Donner Party, a scene with a bunch of punk rockers, a scene . . .

I could go on and on with the plot and character elements, but I suggest that you simply read the book instead. It never fails to be wildly imaginative, scattered and implausible by any rational criteria, and it’s hard to believe that any of this could “really” happen. And yet the emotional wallop that the book delivers admits of no other reality—of course all of this outrageous stuff actually happened. Perhaps in fiction, yes, but fiction that seems, if possible, more real than life itself.

I have rarely read a novel (except perhaps  CLOUD ATLAS?) where the narrative voice was so appealing, so consistent, so welcoming, and so powerful. Every character, fictional or not, that we meet in BEAUTIFUL RUINS is fully drawn and immediately believable as a human being. Every dramatic situation is plumbed to its depths. The absurdity, pathos, the hopes, dreams, and heartbreaks of existence pile on from all quarters. The book’s structure and language—its myriad points of view, multiple narrators, travels through time and space—is a staggering display of authorial virtuosity. And yet, ironically, Jess Walter has most admirably succeeded at the fiction author’s greatest challenge—to disappear at the service of his story.

We are completely subsumed in the varied realities of BEAUTIFUL RUINS. From the opening sentence, guided by its benevolent, ironic, honest, and frequently laugh-out-loud funny narrative voice, we enter a world that belongs to our own—it is as real and as immediate—and yet creates its own reality that can only be found at the center of true works of art.

And BEAUTIFUL RUINS is just that—a true work of art. 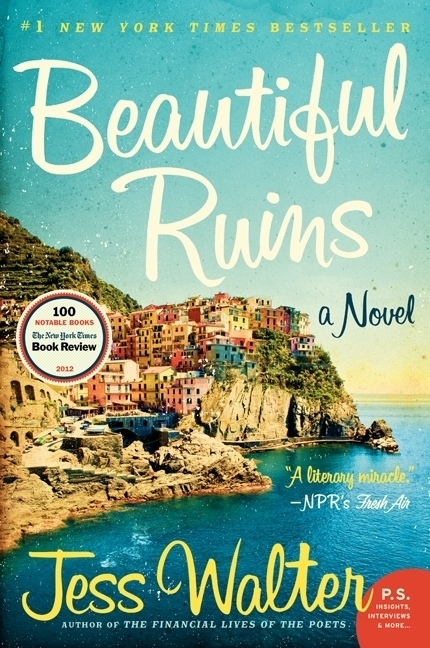 Hailed by critics, loved by readers of literary and historical fiction, and featuring what is arguably one of the most iconic covers of recent years, Beautiful Ruins is the story of an almost-love affair that begins on a rocky patch of the sun-drenched Italian coastline in 1962. Funny and romantic, the beauty and wisdom of Jess Walter’s writing in the last chapter alone will leave musical lines of prose engraved in your memory.

Author Picks: 6 Books That’ll Fly You Away to Distant Lands

10 Refreshing Book Recommendations Based on Our Go-To Café Order