Every time I read Unless, I fall into it. Knowing that descriptions like, “It is late afternoon, early October, the sky darkening, and the lights in the old Orangetown Library already on. The smell of waxed floors is particularly sharp at this hour; it must be the heating system that triggers it,” await me, I open it, sigh, and sink into it like a stone into water.

Carol Shields’ novel, longlisted for the 2002 Man Booker Prize, is about Reta Winters, a writer-cum-housewife on the cusp of her midforties with a novel in progress, a loyal husband, and a beautiful, one-hundred-year-old farmhouse on a rocky perch in the rolling hills of Ontario. It is a house of oak floors, “woody, whorled coves and harbours.” There is a bright Indian rug on the floor, and nearby a Swedish wood-burning stove.

Reta has three loving, intelligent, lively daughters, the eldest of whom, Norah, has recently decamped to a hostel for the homeless in Toronto. Norah sits on the same street corner throughout the chilly Canadian autumn, holding a cardboard sign that reads GOODNESS. This ignites in Reta, a second-wave feminist and soixante-huitard, an internal discourse on what Norah has claimed: goodness, rather than greatness.

If Reta’s gently probing voice and the womblike nature of her warm, cozy home make Unless an enjoyable, swift, and oddly comforting read, the novel also has a political heft; Shields has a hard, brittle bone to pick that occasionally, with a swift sentence, she rips open soft flesh to reveal.

Of Norah’s sudden catatonia, Reta ventures that perhaps she feels shut out by a world that views her as not “capable of rising to the upper ether”; perhaps she has understood “the big female secret of wanting and not getting”; perhaps, as Reta’s writing mentor puts it, she has “succumbed to the traditional refuge of women without power: she has accepted in its stead complete powerlessness, total passivity, a kind of impotent piety.”

Reta is also the author of a “darling” novel, referred to by her (male) editor as a “light, romantic comedy about ordinary people,” and is currently writing the sequel. She riffs on the importance of giving fictional women—and realistic female friends—work, and relates conversations with her editor, who insists her male character, not her female protagonist, be the “moral centre” of the book, arguing: “Alicia is not capable of that role, surely you can see that. She writes fashion articles. She talks to her cat.”

Soon the reader understands that, in Unless, Shields is weaving a passionate defense of commercial women’s fiction into the “small lives” of the women in her novel (Reta, Norah, Reta’s friends and mother-in-law) so skillfully, in a voice so familiar it could be any of us, that it is almost difficult to see. Every time I reread Unless (and it’s impossible not to), I hear a little more rage hidden behind what is held back, what is politely not said but thought.

Shields’ genius is in wrapping the ferocious and the desperate in the quiet moments of a woman’s life. We find the truth laid bare next to a library book, beside a can of lemon spray wax, as Reta buttons her coat. Reta’s voice, as she goes about her daily business, is intelligent and measured, and then suddenly, thinking of her daughter, raw and aching.

Of her (fictional) mentor, Danielle Westerman’s, prose, Reta says: “In the middle of a flattened, rambling paragraph, deceived by warm stretches of reflection, you came upon hard cartilage.” This is such a perfect description of Carol Shields’ purposeful genius that I felt, when I read it, like she was winking at me.

It is Shields’ last book, published just before she died, and as I read it—for the tenth time—I hear an assured voice, at the top of her game, skilled and knowing, and also a dying voice, refusing to go gently, howling with indignation, and a practical voice: getting the laundry done, clearing out the house, saying what needs to be said before she goes.

Abigail Tarttelin is the author of the novels Flick and Golden Boy.

Unless
by Carol Shields 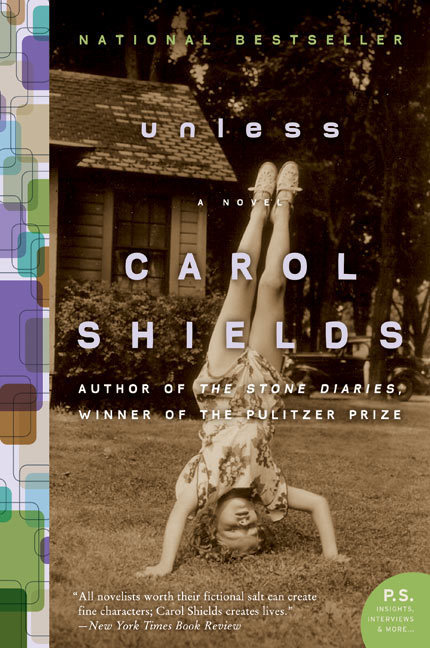 |+| Add to Your Shelf
Unless
Carol Shields