There’s an age-old saying (and Bruce Springsteen lyric) that you can’t start a fire without a spark. This is often true in literature—sometimes all it takes to create a great story is to find something that inspires you to write it. Though most might think of this saying in the context of novels, I think it’s even more true in the case of nonfiction. In a world dominated by the twenty-four-hour news cycle, how do you write about something happening in the world that people will continue to care about?

In the early 1990s, a reporter named Adrian LeBlanc noticed a clipping in Newsday about the trial of a Bronx heroin dealer named Boy George. Interest piqued, she began investigating and soon found herself writing about the case and getting to know the girlfriends (yes, plural) of the neighborhood kingpin. In the process, she found the story she wanted to tell in these girls and their extended families. What resulted is Random Family: Love, Drugs, Trouble, and Coming of Age in the Bronx, one of the most intriguing and masterfully written works of narrative nonfiction I’ve ever read.

Part urban history, part sociological exploration, part journalistic investigation, and part straight observation, Random Family follows Jessica and Coco, two girls born and raised on the streets of the Bronx. As the narrative progresses, they interact with a revolving door of characters, from the men they fall in love with to the friends they lose and the DEA agents who investigate them, which brings them farther into the dangerous life they’re trying to escape.

Random Family took more than a decade to research and write, and LeBlanc effectively moved in with her subjects in order to finance it. The result is a book that is intensely engaging and dense with everyday detail. These are people who sold and took drugs, were arrested, served time in prison, had children, had affairs, and watched people die in front of them, and LeBlanc doesn’t spare any details. It’s an incredibly compelling story and under LeBlanc’s able pen, it reaches the height of Shakespearean drama. What you think you know about “certain neighborhoods” or “certain people” is thrown right back at you, introducing complex and indelibly human figures—I can’t bring myself to use the word “characters.” Jessica, though she’s the girlfriend of a major drug figure, is a teenage girl looking for love. Cesar, her brother, though he’s tied up in the violence that defines the streets, is a teenage boy trying to find his place among his peers. Still, it’s not a depressing book. There are moments of humor, of love, of excitement; tender and recognizable emotions that a reader might not expect.

Despite her proximity to the story, LeBlanc impressively never allows herself to become part of the family she’s embroiled with. Unlike some other works of narrative nonfiction, there’s no attempt to teach a lesson or explore a broader theme. As the author, LeBlanc doesn’t put it upon herself to become a moral compass or a tour guide; she’s a simple observer, shining a light on people who are more often than not categorized by the statistics they’ve contributed to. Instead of making an example or providing commentary, she just lets the reader see the situation for what it is: unbearably tragic and undeniably cyclical. Toward the end of the book, one of Jessica’s daughters, Serena, celebrates her sixteenth birthday. At the party, Jessica’s mother, Lourdes, who has had serious problems of her own and watched her children make just as many mistakes as she has, tries to explain to Serena the dangers of becoming involved with a boy at such a young age. Serena shouts back, “If I want to have sex, I’m going to have sex. Everybody has sex. . . . I am the way I am and I don’t care!” LeBlanc ends the paragraph with one short sentence that says more than any sociologist’s analysis ever could: “She would be pregnant within six months.”

Random Family is not just the kind of book that opens your mind—it opens your eyes. Reading the book in Central Park, I was suddenly overcome with a thought, clear as day. For years I’d sat on the Metro-North, not registering when the automated voice announced that the next stop was Tremont. This book wasn’t a story, and it wasn’t a “setting.” It was a portrait of life, a life that had been lived less than a few miles from where I was sitting. It was an overwhelming experience, to feel like I was reading about a group of people who had existed within the same world. Where were they now? What were they doing? To feel that kind of curiosity and investment in a life so different from your own because of a book, I believe, is incredibly special. It’s what makes Random Family not random, but important and essential.

Julianna Haubner works in the editorial department at Simon & Schuster. You can follow her on Twitter @jhaubner2. 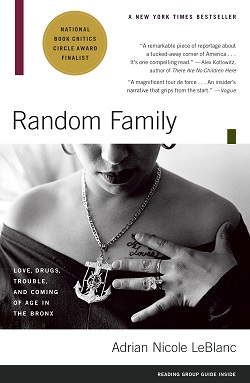 Adrian Nicole LeBlanc’s riveting deep-dive into the life of a family living in the Bronx in the 1990s began when she read a newspaper clipping about the trial of a heroin dealer named Boy George. Soon she found herself meeting members of his inner circle. Despite her proximity to the story, LeBlanc never allows herself to become part of the family or puts it upon herself to become a moral compass or a tour guide; she’s a simple observer, shining a light on people who are more often than not categorized by the statistics they’ve contributed to.