In 1990, I was taking my first political science class, The Politics of Southern Africa. Nelson Mandela was freed from prison, and in Zimbabwe, Robert Mugabe’s ZANU-PF party was in power. I remember that I was excited for the nations of Southern Africa. I remember being hopeful about Zimbabwe’s future and Mugabe’s social plans for former Northern and Southern Rhodesia. I remember sitting on my parents’ back patio in Chester, Virginia, arguing with my conservative father, about Mugabe’s intentions. I was a middle-class white girl, and to me, Mugabe was a liberator who wanted to help his country and reclaim their land from oppressive white colonialists.

Thirty-five years after coming to power, President Mugabe is still in power. He has murdered and plundered the people of Zimbabwe. He has distributed land to himself and those he favors, and committed genocide against his own people, razing their homes and forcing them to build shantytowns. White farmers who refused to leave Zimbabwe have been tortured and murdered. NoViolet Bulawayo’s debut novel, We Need New Names is a powerful depiction of a nation at war with itself. We Need New Names tells this story through the eyes of Darling, a ten-year-old girl, who remembers the “Before” time when there were homes and jobs and she went to school. Now, her home has been destroyed, there is no school, and everything is impermanent. As she runs wild through the shantytown where she lives, she encounters incest, murder, AIDS, and hunger. She dreams of a future with her wealthy aunt in America, and she imagines everything will be easy.

Darling’s eyes interpret this story with an innocence and honesty that only a child can understand. When she travels to the United States to live with her Aunt Fostalina, she finds no home in a country obsessed with consumerism, in a land where food is plentiful, but women starve themselves in order to achieve a beauty ideal that is totally foreign to someone who has gone hungry. Darling is displaced in her own country and abroad.

The natives are not the only ones displaced. When Darling witnesses wealthy white landowners trying to defend their homes from Mugabe’s paramilitary gangs, one landowner tells the mob, “I am an African . . . This is my fucking country too, my father was born here, I was born here, just like you!” This passage complicates our idea of what an African is. Darling isn’t sure either.

Bulawayo is an insightful, inventive storyteller and Darling is more than one girl; she is a symbol for the nation of Zimbabwe. Bulawayo writes, “Look at the children of the land leaving in droves, leaving their own land with bleeding wounds on their bodies and shock on their faces and blood in their hearts and hunger in their stomachs and grief in their footsteps. Leaving their umbilical cords underneath the soil, leaving the bones of their ancestors in the earth, leaving everything that makes them who and what they are, leaving because it is no longer possible to stay.” This poetic language transcends the page and calls the reader to remember the “Before” time, before the country’s own men raped and pillaged.

Memory sustains the displaced and dispossessed. Even after Darling loses her country, she craves it. One advantage the dispossessed have is the power of voice, to write about injustice, adding to the great tradition of African literature. We Need New Names has been shortlisted for the Man Booker Prize, and Bulawayo is the first African female writer to earn this distinction. It is well deserved.

These days, my father and I still do not agree on political matters, but I now understand that I am an outsider looking in. I have not experienced the Zimbabwe that Darling experienced, but I have seen it through Bulawayo’s raw and beautiful novel.

Michele Young-Stone is the author of the novels Above Us Only Sky and The Handbook for Lightning Strike Survivors, which The Boston Globe called “an exceptionally rich and sure-handed debut.” She lives in the Outer Banks of North Carolina with her husband and son. 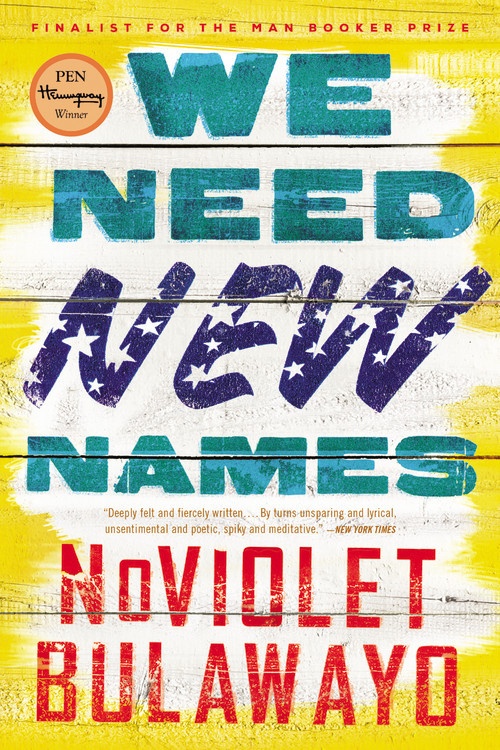 |+| Add to Your Shelf
We Need New Names
NoViolet Bulawayo