Editor’s Note: Elena Gorokhova grew up in St. Petersburg, Russia, although for most of her life it was known to her as Leningrad. At the age of twenty-four she married an American and came to the United States with only a twenty kilogram suitcase to start a new life. She is the bestselling author of the memoirs, A Mountain of Crumbs and Russian Tattoo.

Zhivago’s Children catapulted me back into the world of my Leningrad childhood. Before settling in New Jersey, I grew up among the Soviet intelligentsia: the poets, actors, and bards whose lives are examined in this well-researched and nuanced volume by Vladislav Zubok, a Russian émigré. These artists and writers were often my only escape from the grinding grayness that was our constant reality in the Soviet Union. It was a place that had isolated itself from the world, “a country of closed borders and captive minds” where foreign travel was unimaginable. Yet despite the risks, there were a few who were able to break loose from the trap of Soviet indoctrination and become “a vibrant and diverse tribe, with intellectual curiosity, artistic yearnings, and a passion for high culture.” They were able to see beyond the Soviet mentality—the collective communist brine we had all been marinating in since nursery school—and open their minds to “humanist individualism.”

After Joseph Stalin’s death in 1953 and the implemented process of de-Stalinization known as the “Khrushchev Thaw,” intellectuals hoped to gain increased artistic freedom. They were quickly disappointed when Stalinists seized power in the mid-1950s and forced the intelligentsia to again submit to the humiliation of the Ideological Commission’s criticism. The propaganda machine was once again accusing the opposition of being agents of American and British imperialists, just as it is doing now in Vladimir Putin’s Russia.

Among the nonconformist artists chronicled in Zhivago’s Children was the legendary sculptor Ernst Neizvestny. Neizvestny resisted the Kremlin’s pressure and confronted Nikita Khrushchev himself, who had declared that contemporary artists were “faggots” and their work “dog shit.” In 1962, Neizvestny single-handedly challenged the party’s disdain for contemporary art by blocking Khrushchev’s entrance into an exhibition hall filled with his sculptures. The next day, Pravda published a damning article denouncing nonconformist art, and the exhibit was closed. Ironically, after the chairman’s death, Khrushchev’s family asked Neizvestny to design a tomb for the former Soviet leader. In 1976, Neizvestny immigrated to the West, where he now lives in New York City, but his monument still rises over Khrushchev’s grave in Moscow.

In the last chapter, the author writes that the collapse of communism “brought to an end the intelligentsia’s historical mission.” But did it really? Russia is no longer a Communist country, but it is far from a pluralist democracy. The Soviet news programs I remember were tame in comparison to today’s vicious mudslides of lies and disinformation that regularly flood state-owned Russian television. Just as in the 1950s, the Stalinists are back, with all their old familiar terms dusted off and re-energized for a new government. My motherland seems to be pedaling backwards, enthusiastically embracing authoritarian doctrine in the twenty-first century.

However, despite the many assaults endured by free thinkers in contemporary Russia, there still exists an opposition that challenges the policies of Putin’s government. As long as there are artists like Andrey Zvyagintsev, the director of the Golden Globe–winning film Leviathan, willing to explore the injustice of the Russian power system that crushes the individual, there is still hope for resistance and change.

For me, Zhivago’s Children, with its black-and-white cover resembling images of 1950s Soviet television, is a walk down the brutal and unforgiving path of personal and collective memory. For Westerners who want to try to understand the murky depths of the Russian psyche, this book will illuminate your way. 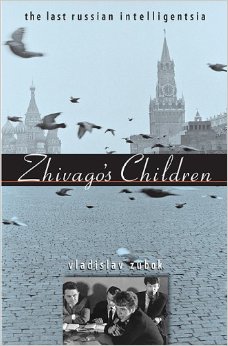