When a Publisher asks you to review a book, in this case, Last Night in Montreal, and the book is written by Emily St. John Mandel whose latest book, Station Eleven, was nominated for the National Book Award, you have to take the request seriously. And I did. But I was also a bit skeptical. I had never read anything by Ms. St. John Mandel and had no idea if I would like the book. What would I do then? Pretend I would review it but “never get around to it”? Or be forced to write a review about a book I didn’t like? It was a moral dilemma to say the least. But a promise is a promise so I owed it to the Publisher to at least read the book.

I downloaded a sample chapter to my phone so I could read it on my subway ride home. The dilemma that faced me as I read was not how to get out of reviewing the book but rather that I was whipping through the pages and by the time I had finished the excerpt I was still underground and unable to download the rest to keep reading. The 10 minutes it took to get above ground felt like an hour, so badly did I want to find out what happened next.

The book starts out very Gone Girl: A woman disappears from a Brooklyn apartment and her boyfriend spends days trying to figure out where she went and why. The boyfriend, Eli, does not call the police (for some reason in these kinds of books no one ever calls the police) he just tries to reconstruct the last day to see if he missed a clue. Somehow he knows Lilia, his girlfriend of only a few months has left of her own volition. You learn why as the pieces of their story are revealed, one at a time, chapter by chapter.

Right as you are hooked into what is happening to Eli the story changes perspective and tone and you are swept back into the mystery of Lilia’s childhood. A childhood spent on the road, running from the police after her father abducts her. And just as you are getting the rhythm of the road the story switches perspective again and you are back with Eli who gives you a few more details of the days before Lilia left him. The book is a series of little bits of overlapping color that finally create a full picture.

Eli is working to complete his thesis on the lost and disappearing languages of the world and the author beautifully weaves snippets of information about these languages throughout the story (my whole review could have just been lines and paragraphs and chapters, I liked the writing so much.) And Lilia takes photographs, thousands of photographs, which she has done since she was little, hoping to document the lost moments of her life. A record to prove she is not a ghost.

The story is told from different angles so that you get the perspective of the characters Lilia’s story has impacted. There is Eli, her father, mother, brother,  the other people she has loved and left in her life the way she leaves Eli, and there is, most poignantly, the detective who dedicates his life to tracking Lilia down. The cost of his doggedness is his marriage and ultimately, his daughter, who he abandons in order to search for Lilia. That daughter, Michaela, a frustrated tightrope walker and club dancer, lures Eli to Montreal on the promise she will get him back to Lilia.

At the heart of the story is a mystery, really two mysteries: why Lilia was taken and what happened to the detective who finally found her. These two mysteries propel the story and aren’t resolved until the very end but it is the writing that makes the book so compulsively readable. There are times, especially when Eli is in Montreal with Michaela, when the story drags a little – something I believe the author does deliberately so that you can experience the frustration and yearning of the characters — but the writing never flags. Every page has a line that is beautiful, especially when the author is describing loss. The book is full of loss and the kind of missed moments that would make Thomas Hardy proud. (If you like having a soundtrack while you read,  The National’s cd, “Trouble Will Find Me” is a perfect choice for this book.)

In the end, there is a resolution, but again, like Gone Girl, it may not be the resolution you expected or hoped for but this is an ending that will stay with you a long time after you stop reading. A book recommendation is a gift and I am very glad this one was given to me. 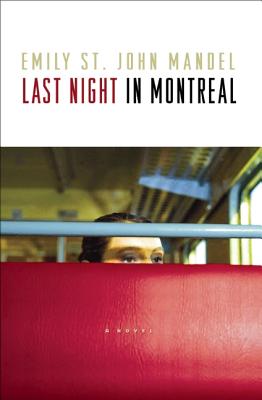 Lilia Albert has been leaving people behind for her entire life. She spends her childhood and adolescence traveling constantly and changing identities. In adulthood, she finds it impossible to stop. Haunted by an inability to remember her early childhood, she moves restlessly from city to city, abandoning lovers along with way, possibly still followed by a private detective who has pursued her for years. Then her latest lover follows her from New York to Montreal, determined to learn her secrets and make sure she’s safe. Last Night in Montreal is a story of love, amnesia, compulsive travel, the depths and the limits of family bonds, and the nature of obsession. In this extraordinary debut, Emily St. John Mandel casts a powerful spell that captures the reader in a gritty, youthful world—charged with an atmosphere of mystery, promise and foreboding—where small revelations continuously change our understanding of the truth and lead to desperate consequences. Mandel’s characters will resonate with you long after the final page is turned.

Another Compelling Novel by the Author of Station Eleven