Antwerp is a funny little book. It’s comprised of 54 sections and is hardly eighty pages in length. I say “sections” because chapters suggest something complete, a beginning and an end, an unfolding of events. Sections, however, are more open-ended, neutral; they merely act as distinguishing marks, and say nothing of the content. The section names are oblique and provide the reader with very little by way of direction. In some cases, they feel like an afterthought, as if chosen after the section was written, like when editors name untitled poems by their opening line. Bolaño uses prosaic names like “The Sheet,” “The Redhead,” “Twenty-seven,” and oddly ominous names like “Footsteps on the Stairs.” In fact, they appear so random, it may be that they’re entirely conscious; that Bolaño sought first an image, an impression, a concept, and decided to explore it thoroughly through prose. Antwerp is the length of a novella, but only loosely attempts at narrative story-telling; more so, it feels like a shattered mirror, the reader having to rummage through the pieces and recognize where the angles connect.

It is exactly the kind of literature I divine to find. Where the writer has chosen not to appeal to a reader, a market, but to an impulse which makes sense of life through writing; an inspection, so to speak, of feelings, signals, and moments. Bolaño seems to be thinking through these ideas as he writes, thereby forgoing the need to set a scene or play by the rules of narrative story-telling. Instead what we read is a compressed sprawl of the Bolaño universe, which explodes and contracts, spirals and fades, touching nonetheless on themes that consume him: crime, corruption, the seedy side of street life, drugs, sex, and rebellion. Calling Antwerp a novella is inaccurate; it’s more so a prose-poem.

Antwerp was completed in 1980 when Bolaño was twenty-seven years old. It wasn’t published until 2002, the year before his death. The books we recognize: The Savage Detectives, 2666, and The Third Reich (published posthumously) are works that came to define his literary legacy, and which, in many ways, proclaimed him a novelist. But it’s been noted that Bolaño truly wanted to be remembered as a poet, and it’s in his early writings — in our case, Antwerp — where we can see his preoccupation with poetry germinate and flourish. As described on the book’s jacket, Bolaño called Antwerp “the only novel that doesn’t embarrass me.”

To me, Bolaño’s sections are replete with mesmerizing prose, of images often replacing descriptions; it never fails to attempt at something, to recover what’s lost through writing and re-writing. It’s not something I would recommend widely, but it is a book I would take with me on a long train ride. Because as I read it, and re-read it, I feel as though I’m in that room with a young Roberto Bolaño, standing behind him as he struggles to put thought to paper, writing not because it’s a profession, but because writing is therapy, a way of seeing. Antwerp, then, is the man himself, stripped of contrivance and allure, writing to free himself of his own demons. 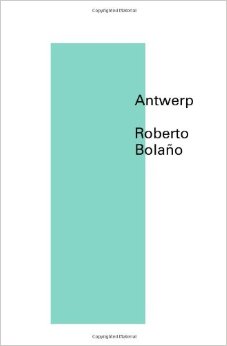