Picture a dimly lit apartment containing hundreds of shelves filled with paperbacks, hard covers and first editions. Picture a man who sits at a desk in the center of the apartment, reading for hours a day. He won’t let you open the blinds because the light might hurt the books. There are flashlights scattered and little ladders so he can find a book he wants. That’s my dad.

One day, I was hunting among the shelves for a really good read. My dad suggested Fevre Dream, by George R.R. Martin. (This was in the days before Martin was famous for Game of Thrones.) “I want a book that I can’t put down,” I said. “Fevre Dream,” my dad repeated.

Picture a cabin on a ship bound for New Orleans in 1857.  Its bookshelves are crammed with fine literature. Its occupant loves knowledge. He is co-captain of the steamer and he has a few rules. No one may bother him during the day. He cannot be disturbed while the sun is out. If he wants to read he will light a match in the inky darkness of his cabin.

Joshua York lives here. Abner Marsh is his partner. Together they have built The Fevre Dream, the finest steam ship the Mississippi has ever seen. The mirrors lining the dining room sparkle in the light of magnificent chandeliers overheard. York demands that mirrors be central to the ship’s design. Mirrors everywhere, he says.

Just as York stirs, Abner Marsh turns in.  Marsh is fat, gruff, homely, unsophisticated, and forthright. York is slender, soft-spoken, beautiful, scholarly and deceptive. Marsh is straightforward; York is cunning. Their partnership begins as strictly financial: York saves Marsh from bankruptcy by putting up the money to build an extravagantly elegant boat. In return, he demands that his privacy be respected and his motives unquestioned.   York takes his roast beef extra rare and drinks an odd concoction at dinner. He wants to learn how to steer the ship but he wants his lessons after sundown. The crew tells him it is impossible to master the river at night but he insists that they trust him. He has very keen eyesight.

York also disappears a lot. He comes back before dawn, sometimes covered in blood. Marsh is not a fool. It takes two confrontations to get the full truth out of York. Yes, he is a vampire—but he doesn’t drink blood. When all of York’s cards are finally laid out, he and Marsh become true partners, not merely by contract but in heart and soul. They complement each other and need each other.  And the world needs them. Ancient enemies lie in wait.

Fevre Dream is about friendship as much as it is about ghouls in the night. It is about the violence in us all and the choices that determine our character. It is also suspense at its finest, paced to maximize dread. You will care deeply for the characters, who utter some of the funniest, sharpest and most poignant dialogue you’ll read in any novel. This is no ordinary vampire tale and it will not be confined to the genre.

It also happens to be the only vampire novel that can compete with Dracula.

True story: I fainted on the subway reading Dracula. I have a condition called vasovagal response. If I see blood–or even read about it–my blood pressure nosedives and I pass out. Only a tiny percentage of the population carries this gene, but most people feel affected by bodily fluids. As delicate as we’d like to be about them, bodily messes impose on our lives daily. We menstruate, we nurse, we eat and void and excrete–and we bleed. All these messes splash the pages of Fevre Dream like water from a river on a stormy night.

Hop on board The Fevre Dream if you want to witness an epic battle between nobility and primal urge, between moral fiber and violent lust, between purity of heart and raw animal desire.

The ride is bumpy and the water runs red, but the view is spectacular. My dad promises you’ll love it. He may not be as old as Joshua York, but like York, he’s read a few (thousand) books in his time. Step into the vampire’s cabin.  He’ll light a match and show you the way to the books that reveal his secrets and his struggle. 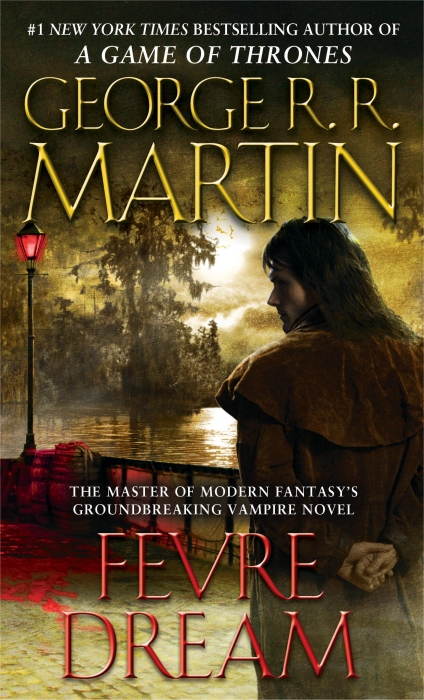 Abner Marsh, a struggling riverboat captain, suspects that something’s amiss when he is approached by a wealthy aristocrat with a lucrative offer. The hauntingly pale, steely-eyed Joshua York doesn’t care that the icy winter of 1857 has wiped out all but one of Marsh’s dilapidated fleet; nor does he care that he won’t earn back his investment in a decade. York’s reasons for traversing the powerful Mississippi are to be none of Marsh’s concern—no matter how bizarre, arbitrary, or capricious York’s actions may prove. Not until the maiden voyage of Fevre Dream does Marsh realize that he has joined a mission both more sinister, and perhaps more noble, than his most fantastic nightmare—and humankind’s most impossible dream.