In the past few months there have been serious earthquakes in Chile, the Solomon Islands, and Southern California; tornadoes in the middle of the United States; cyclones in the Pacific; mudslides in Washington state; and continuing unexpected severe weather in many parts of the world. According to Native prophecies, we are in the time of the earth cleansing, a time when the planet will rebalance itself to overcome the damage wrought by humans.

In 1989, I wrote Black Dawn, Bright Day: Indian Prophecies for the Millennium with the late Native teacher, Sun Bear. When I reread this book now, it is like a summary of the news of the intervening years. So many of the prophecies in it have been or are being fulfilled. Desertification continues. The seas continue to be polluted. Water tables keep dropping, and much of the earth’s water isn’t fit to drink. Poisons continue to be put into the land. Consequently, much of the food we now eat has few natural nutrients. This weakens the food chain, and then the immune systems of all humans and animals. This, in turn, makes us ever more vulnerable to both old and new diseases. “Natural disasters” are increasing in intensity to the point that they are happening somewhere every day.

In Black Dawn, Bright Day, Sun Bear revealed, “A prophecy of my Native people speaks of a time when the earth would hold back her increase: one area would be too wet; another, too dry. One place would be too hot; another, too cold.” Sun Bear only lived to see the beginning of the climate changes that are now occurring.

He also taught, “There will come a time when the people will not be able to go out of their houses because of the poisons in the air.” In Beijing, air pollution levels have reached such toxic proportions that people are sometimes advised to stay inside.

Sun Bear said his visions told him that while we speak of earthquakes of seven and eight on the Richter scale, the spirits speak of ones of ten and twelve. As earthquakes increase in quantity, locations, and duration, this seems likely. Remember the West Virginia earthquake that closed the Washington Monument in the District of Columbia?

In The Sixth Extinction: An Unnatural History, Elizabeth Kolbert questioned whether we are now in the beginnings of a sixth extinction, one devastating enough to wipe out most of civilization as we know it. Using wide-ranging scientific evidence, Ms. Kolbert showed this might indeed be the case. Native teachings acknowledged, as does Ms. Kolbert, that the earth has gone through major changes throughout its history. What is different now is that human activity is escalating the speed and severity of these changes.

According to Sun Bear’s teachings, the root of the problem is a different way of thinking: a basic difference in life philosophy between traditional Native earth-based people and modern urban ones.

Unlike the Europeans who settled here, Native people affirmed life not only for themselves but for all of their relations in the mineral, plant, and animal kingdoms. Every bit of land is sacred to Native people. They feel responsible for everything on the planet—not just for one generation, but for all generations to come. They conceive of the earth as a living being, capable of making any changes necessary for its own survival, whether or not these changes are convenient for humans.

Sun Bear felt there would be a time when the sons and daughters of the dominant civilization would come to Native people and say, “Teach us, for we are about to destroy the earth.” Sun Bear spent his life trying to teach anyone who would listen about the earth changes and what people need to do to soften and survive them.

In Black Dawn, Bright Day, there are many pages devoted to offering hope to those people who realize what is happening in the world, accept responsibility for the problems, and seek personal and community solutions to these imbalances. Life on earth may be teetering on the brink of extinction, but it is possible some people will come through this period of time and enter into a new, more positive, and balanced way of living with the earth and all of her creatures.

Black Dawn, Bright Day : Indian Prophecies for the Millennium That Reveal the Fate of the Earth
by Sun Bear and Wabun Wind 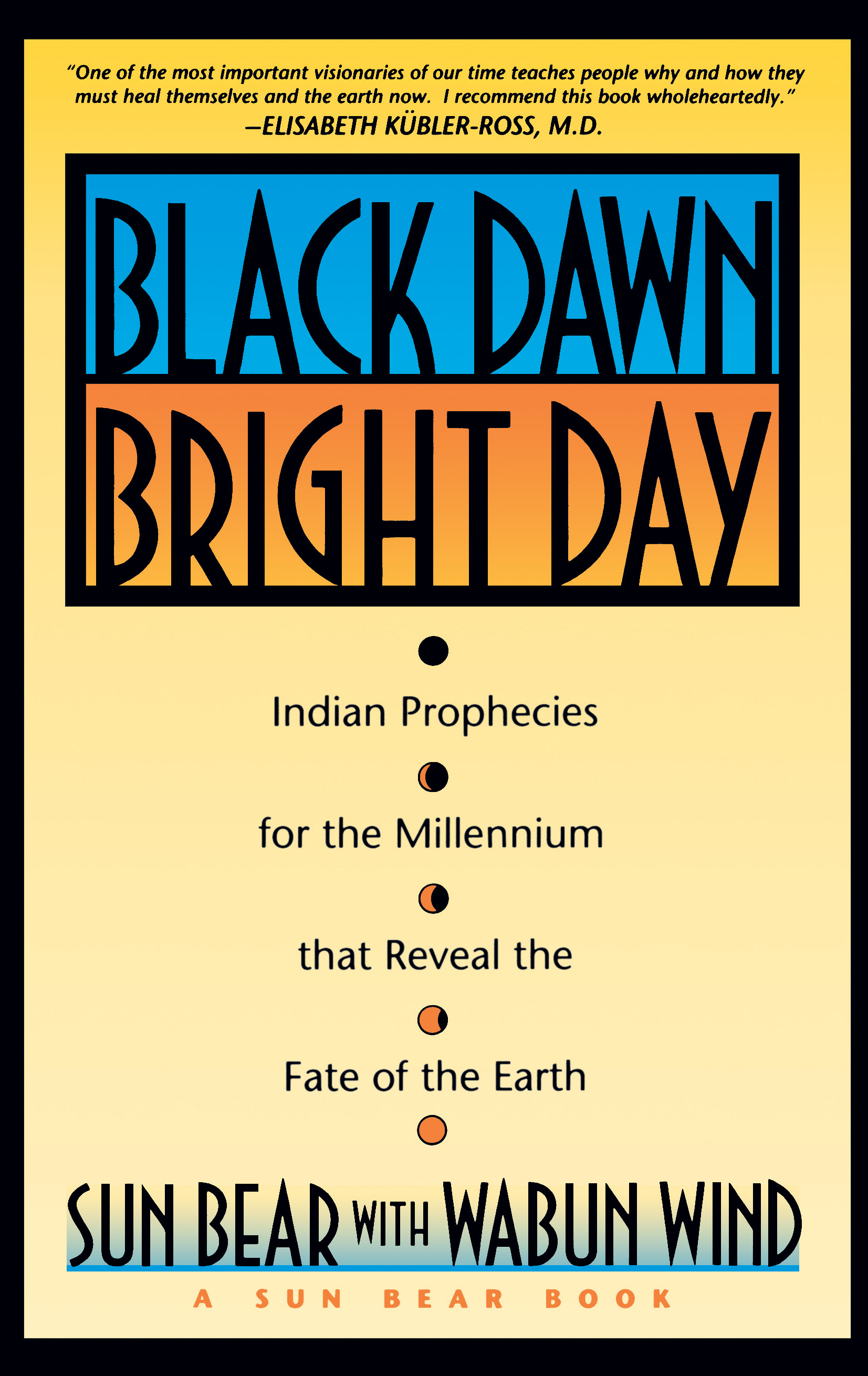 |+| Add to Your Shelf
Black Dawn, Bright Day : Indian Prophecies for the Millennium That Reveal the Fate of the Earth
Sun Bear and Wabun Wind

A Writer Finds Truth In Predictions Made Twenty-Five Years Ago