I read so much for work (in addition to the books I want to read) that paradoxically I am always looking for something new to read in order to break up my never-ending reading pile. Right now I am reading a manuscript, two galleys, a book we are about to publish, one we just published, and Lena Dunham’s new book, which I am quite enjoying even though I don’t like Girls. I have piles of books and manuscripts and galleys all over my house, but no matter how engrossed I am in everything I have to read, I am always on the lookout for a book in which to escape. I am constantly on the prowl for something that will distract me from the “task” of reading and remind me of the joy of reading.

Romances are excellent for this, as are “beach reads” and little histories of interesting things. I am a sucker for the kind of book that looks like it will take me to a time and place that isn’t the one I sit in every day.

I was drawn to A Hundred Summers by Beatriz Williams because the cover is absolutely perfect – two women leaning back elegantly in bathing suits under a giant umbrella. I knew immediately it was a story from the 1930s, that it focused on two women, one seemingly racier than the other. And that beach looked like someplace I wanted to be.

The story begins as two young women, Budgie and Lily, speed in a brand-new roadster—a gift from Budgie’s loving daddy for favors rendered—from Smith to Dartmouth to watch a football game and cheer on one of Budgie’s myriad beau. How can you not fall for a story about two New York society girls between the wars, who ultimately fall in love with the same man, that begins with the line: “One hundred and twelve miles of curving pavement lie between the entrance gates of Smith College and the Dartmouth football stadium, and Budgie drives them as she does everything else: hellbent-for-leather”?

Flighty Budgie Byrne and steady Lily Dane are best friends who have grown up in a life of privilege in New York and the exclusive town of Seaview in Rhode Island, where their families have summered for generations. Life is as it always has been and the future for both girls seems set, but looming over the horizon is the fallout from the 1929 Crash that will effect certain families and WWII, which will impact everyone. But those events are far away as the story begins in the bleachers at the football game where Lily falls hard for Dartmouth’s quarterback, Nick Greenwald. Nick is all the things that Lily is: kind, caring, decent, beautiful, and their instant connection creates a little sliver of jealousy in Budgie that festers throughout most of the story.

Williams is excellent at setting the milieu of upper-class WASP society: the cold mothers, too-familiar fathers, tribal mentality, inherent racism, and easy alcoholism that mask generations of secrets and regrets.

Lily and Nick fall in love, but they are refused by her family because, they believe, he is Jewish. They decide to elope, and what happens on that night forces Lily to give up Nick and pushes everyone in Seaview into years of brittle, damaging silence that is only resolved in the last pages of the book.

Williams has created a fast-paced page-turner that, although glorious as a beach read, is just as wonderful with a cup of tea under a blanket during a winter weekend. Her characters are nicely made, even if they come from stereotypes, and her plot is light and fast-moving. The end is dramatic and satisfying. Ultimately, this is a gripping love story about two people who need to be together and can’t be, but it is also a broader story about betrayal, family secrets, crossed wires, and the high cost of maintaining a frayed friendship and following outdated social mores. It has one of the best endings—very tidy, and everyone gets what they deserve—that I’ve read in a long time.

A Hundred Summers
by Beatriz Williams 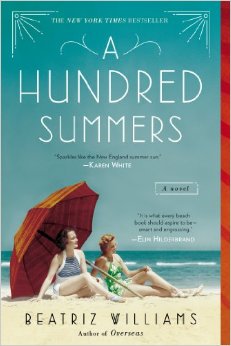 |+| Add to Your Shelf
A Hundred Summers
Beatriz Williams