In his NY Times bestselling book, Travels with Casey, Benoit Denizet-Lewis and his Labrador take a funny, touching cross-country RV trip through thirty-two states and into the heart of America’s relationship with dogs. Here’s Denizet-Lewis’s list of must-read books about every dog lover’s favorite subject – dogs!

As I read dog book after dog book for research while writing my own dog book, it occurred to me that there might be too many dog books. Still, I soldiered on. These books were my homework; besides, one needs something to do while curled up next to your dog in a ghostly West Texas RV park. I read so many dog books over the course of my cross-country journey with my dog that I feel well-equipped to tell you about a few good ones you may have missed.

The Difficulty of Being a Dog, by Roger Grenier

This beautiful collection of vignettes by French writer Roger Grenier (and translated by Alice Kaplan) delves deep into literature, history, and metaphysics to explore our complicated, fascinating connection to dogs. Though the slim volume is a celebration of that relationship, it’s an introspective and nuanced one. Grenier writes, “A pet is a protection against life’s insults, a defense against the world, the somewhat vain conviction of being truly loved, a way of being both less alone and more alone.”

Grenier also doesn’t shy away from exploring the ways humans might—often unintentionally—hurt our best friends. “Perhaps those who love their dogs the most are, by that very fact, executioners,” he writes. “Here Sartre isn’t wrong: too close a proximity to humans makes domestic animals unhappy. They spend their time observing their master, figuring out what he’s going to do with them. Everything is a sign—a cough, a glance at a watch, turning off the television. There is no innocent act. Every minute carries its ration of anguish.” 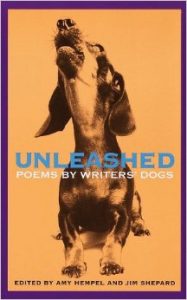 A delightful exercise in anthropomorphism, this poetry collection (featuring work by Edward Albee, Mark Doty, John Irving, Anne Lamott, Arthur Miller, Amy Hempel, and many others) was conceived of after many drinks—and imagines what poet dogs might dream up.

In the introduction, Hempel and Jim Shepard write that their “impulse is more complicated than simple anthropomorphism, and is different from writing a poem about a dog. It is an attempt at translation; it comes from watching a dog and believing we can interpret what we see. It bespeaks another kind of intimacy (“Yes,” the cynic says. “Invented”). There are sad poems, funny poems, and, perhaps unsurprisingly for poems penned by dogs, several about food. 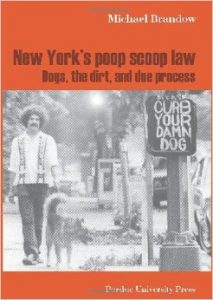 Don’t let the terrible title fool you—this book about life before New Yorkers picked up after their dogs is fascinating, funny, and surprising. When New York City mayor Ed Koch proposed the country’s first poop-scoop law in 1978, dog owners were aghast—and promised to revolt. “Like the Jews of Nazi Germany,” the head of New York’s dog owners guild complained at the time, “we citizens, including the old and infirm, are being humiliated by being forced to pick up excrement from the gutter.”

Dog issues were hugely politicized at the time, and dog bashing was at an all-time high. Author Michael Brandow chronicles it all with remarkable depth—and hilarity. Brandow quotes writer Fran Lebowitz in perhaps the greatest takedown of dogs ever published: “Pets should be disallowed by law. Especially dogs. Especially in New York City. I have not infrequently verbalized this sentiment in what now passes for polite society, and have invariably been the recipient of the information that even if dogs should be withheld from the frivolous, there would still be the blind and the pathologically lonely to think of. I am not totally devoid of compassion, and after much thought I believe that I have hit upon the perfect solution to this problem—let the lonely lead the blind.”

It’s a shame that Dog Love, by Harvard professor Marjorie Garber, didn’t reach a wider audience. It might just be the smartest book ever published about the relationship between dogs and humans. It’s also a daring book. In addition to chapters about “Breeding,” “Dog Laws,” and “Dog Loss,” there’s one titled “Sex and the Single Dog” about a topic that most dog writers won’t touch—bestiality.

Though bestiality became a capital punishment in many European countries during the Renaissance, it remained so widespread that it was one of the most preached-about topics of the era. In her book, Garber writes about intimate relations between women and their lapdogs (particularly spaniels) during this time. Numerous literary references to lapdogs indicate they were essentially viewed as sex toys, valued by ladies for their skill at performing oral sex.

Three More Great Dog Books You May Have Missed

A comprehensive account of dog evolution, history, and behavior. 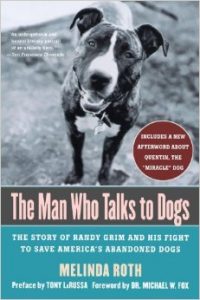 A tribute to the simple, glorious act of walking a dog.

And if that’s not enough canine love for you, check out our list of even more books about man’s best friend.

Travels with Casey
by Benoit Denizet-Lewis 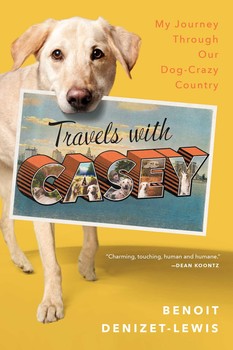 |+| Add to Your Shelf
Travels with Casey
Benoit Denizet-Lewis

A moody Labrador and his insecure human take a funny, touching four month, thirty-two state, 13,000 mile cross-country RV trip into the heart of the most powerful interspecies bond there is: America’s relationship with dogs.

The Dog Days of Reading