My obsession with Wilkie Collins started, strangely, with The Moonstone. It’s often credited with being the first “detective novel,” but it isn’t. It is considered a classic, but it’s boring and poorly plotted. I read it to please my father, who had loved it. When I told him what I thought of it, he said, “Oh, yes, I remember now, it is boring. Try The Woman in White, that’s much better.”

Indeed. I spent that year collecting and reading every Collins novel I could find. The Woman in White, while perhaps the least needing of publicity, is the best book with which to introduce Wilkie Collins to the uninitiated.

The Woman in White, published serially in Charles Dicken’s magazine All The Year Round in 1859, and then in book form in 1860, heralded the arrival of the “sensation novel.” The book was an instant smash. Indeed, since its publication, it has never been out of print.

Other authors quickly followed his lead, working from the genre’s central technique: infusing the domestic sphere with a Gothic stream of mystery, secrets, dark intentions and deep anxiety about sexuality and identity.

Collins, however, remained peerless in creating thrills and developing character. His dialogue is so crisp, his backdrops so vivid, and his pacing so suspenseful that he foreshadows an entirely new medium of storytelling: cinema.

His prose is remarkably modern and a breeze to read. His female characters are particularly sympathetic and fascinating. Upon the publication of The Woman in White, one male reader wrote to Collins to demand the identity of the woman who had inspired the character of “Marian Halcombe.” Besotted by her intelligence and mystique, he wanted to ask for her hand in marriage. Alas for the fan, she sprang entirely from Collins’s mind.

As the story opens, our hero, Walter Hartwright, encounters a woman – in white—on a lonely road at midnight. She asks him the way to London. Despite her ghostly garb, she is quite human. She speaks with intensity borne of fear, referring vaguely to a predator lurking nearby. This spooky meeting is a hallmark of Collins’s work: he juxtaposes gothic chill with human vulnerability.

The Woman in White is told from multiple perspectives, beginning with Walter’s.  It is on his way to Limmeridge House to work as a drawing master to Marian Halcombe and her sister, Laura Fairlie, that he meets the woman in white. It is but his first glimpse of her, and far more unsettling events lie in wait.

When Count Fosco and Sir Percival Glyde arrive at Limmeridge, the plot accelerates and the pages fly. Eventually, Marian must go to war with the Count. In a twist characteristic of Collins’s novels, a man falls for a plain-looking woman because he admires her brain. The Count’s romantic yearning for Marian, who detests him, is one of the most fascinating portraits of love to be found in Victorian literature, for the Count is a cynic and Marian is anything but a fair damsel painted in a soft hue.

There’s a lot of plot in this book, so hold on tight. We have eavesdropping in the rain, kidnappings, asylums, mistaken identities, whispered warnings, severe emotional suffering and (possibly) murder before the book reaches its final confrontation. There is also great love and tremendous perseverance. And the book possesses the rarest of traits in suspense novels: an utterly satisfying conclusion.

Next, read No Name, in which young Magdalen goes undercover to fight a law that deprives her of her rights, encountering danger and evil at every turn. Read Basil, in which Collins explores the contours of infidelity and society’s differing attitudes toward the sexuality of men and women. Then find all the rest of them, from Man and Wife to The Dead Secret. You’ll have a year’s worth of dizzying plots and compelling characters to keep you company.

But start with The Woman in White; it is the most famous of Collins’s tales and deservedly so. And take heart once you’ve read the last of his books; you have Mary Elizabeth Braddon and Lady Audley’s Secret to discover next.

The Woman in White
by Wilkie Collins 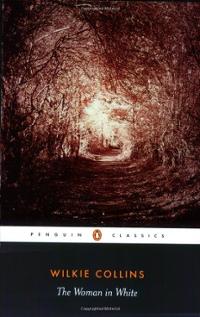 |+| Add to Your Shelf
The Woman in White
Wilkie Collins

Generally considered the first English sensation novel, The Woman in White features the remarkable heroine Marian Halcombe and her sleuthing partner, drawing master Walter Hartright, pitted against the diabolical team of Count Fosco and Sir Percival Glyde. A gripping tale of murder, intrigue, madness, and mistaken identity, Collins's psychological thriller has never been out of print in the 140 years since its publication.