I will always treasure my elevator-moment memory of Joan Rivers leaving me after a two-hour final editing session on the pages for Murder at the Academy Awards. The plot was all worked out, it had tension and a great climactic scene, but Joan wanted one more chance to sit with me and go page-by-page and insert as many jokes as she could. She arrived in full dress and makeup, as she always did, ready to work. Before we started, I asked her about the jewelry she was wearing. “This, this, this and this are from the Joan Rivers Collection. This,” she said, pointing to a beautiful diamond brooch, “was from Edgar.”

We had only about two hours carved out of her busy schedule to go over the final manuscript before she was to leave the next morning for China, to do Olivia Newton-John’s “Great Walk to Beijing,” a 228-kilometer breast-cancer benefit along the Great Wall of China. (“I was there for the paparazzi!” she later said of Olivia’s fundraiser. “But that bitch actually wanted to walk the entire length of the Great Wall of China! And I was wearing Jimmy Choos.)

I had alerted several people in publicity, marketing and sales that Joan was going to be in the building, but it was set up at the last minute, and I told her not to expect many people. We were working together both on this book and Men Are Stupid…And They Like Big Boobs a year before Joan won the Celebrity Apprentice. It was one of the intermittent lulls in her popularity and Joan knew that the only salvation in those lulls was to keep on working. So she was here to work.

We sat down in the tiny, cave-like thirteenth-floor small conference room. After a few minutes, some people from publicity came by. Joan was a consummate professional, with a genuine appreciation of the importance of everyone in an organization. She totally charmed them, and we got back to work. A few minutes later, some people from sales came by. Again Joan went into her gracious and charming mode. They left and again we got back to work. Then some more people came by. And then some more. Apparently, word was spreading that meeting Joan was fun and now everyone seemed to be dropping by the tiny conference room to meet her.

“This is like that scene in the Marx Brothers,” Joan said. Our two hours were running out, her nerves were starting to fray, but she never lost her cool. Finally, she wrote the last joke—not a joke really, more like a final message to the reader of her Red Carpet mystery, giving the reader permission to wear anything the reader wished while reading the book, without being judged or asked “Who are you wearing?”

In fact,” she wrote, “simply having you read this while lounging comfortably in flannel pajamas adorned with delicious chocolate ice-cream stains will make me appreciate and love you even more.”

Our work session over, I walked her to the thirteenth-floor elevator, not really wanting to let her go.

“Have a great time in China,” I said.

“Thanks,” she replied as the elevator door closed. “I’ll bring you back some Chinese.”

You still owe me an eggroll, Joan.

Murder at the Academy Awards
by Joan Rivers and Jerrilyn Farmer 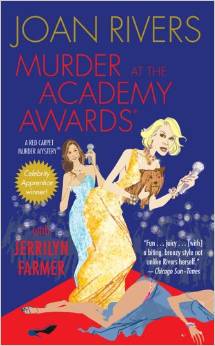 Rivers and Farmer created a snarky, funny murder mystery about Maxine Taylor, a red-carpet interviewer who witnesses the sudden death of a young Oscar nominee on the big night. She goes undercover at a rehab center to learn more about the young actor's past and to uncover the killer.

Can We Talk? 4 of Joan Rivers Most Hilarious Books