An important part of my daily life as an apathetic Millennial involves the strategic avoidance of hype. Overenthusiasm or, even worse, earnest admiration of any kind is a social embarrassment too great to risk, regardless of whatever cultural phenomenon, life-changing product, or stale viral video on which I might be missing out.

Thus, the first time I saw a review of WILD by Cheryl Strayed in Time magazine, the reviewer’s sincere delight in the book’s scope and artistry was simply too obvious for me to bother answering his imploring call to read it. Overlooking the apparent irony in my subsequent decision to go into book publicity, imagine my smug sense of superiority as WILD quickly took off, rocketing to the top of the New York Times bestsellers list. If millions of people across the globe were raving about it, WILD likely wasn’t worth my valuable time.

Two years later, however, the hype had died down, a waning that coincided nicely with the quiet deterioration of my collegiate arrogance. The polar vortex had descended upon New York City, and I was spending nearly twenty hours a weekend in bed, reading, pausing only to pull on additional wool socks over the ones I was already wearing. My roommate had left a copy of WILD in a stack of paperbacks on the coffee table. Two delivery orders of pad Thai, nine inches of snow, and seventeen hours later, I set WILD down beside me, astonished at what I had been missing since the book’s initial release.

In the weeks that followed, I remained fixated on the details of Strayed’s odyssey; thoughts of her life outdoors were never far from my mind as I shuffled in and out of the drab, winterized New York City office buildings. I thumbed back through the book’s pages, wishing for something more—a movie, a sequel, with the sort of ardency generally associated with adolescents who’ve just closed the final installment of the Harry Potter books. Having grown up in the Pacific Northwest, WILD’s apt and sweeping descriptions of the Western United States sparked in me an insatiable yearning to escape New York as quickly as possible, preferably forever, and take up a simpler life in the foothills of the Cascade Mountains. I went so far as to Google “hunter gatherer, Washington State.” Homesick nostalgia, combined with an altogether unoriginal brand of general twentysomething angst, left me desperate to take action, any action, in propelling my life forward in the vague direction of wildlife.

One snowy Saturday, in a cliché almost too embarrassing to recount here, I rummaged through my dresser drawers in search of my canvas backpack. With no plan in mind, I shoved a book, dark-chocolate-covered pretzels, a credit card, and a pair of gloves into the bag, slung it over my shoulder, and scurried to Grand Central Station. I poked hopefully at various touch-screen buttons on the automated ticketing machine, figuring I would disembark whatever train I boarded when I felt the spirit of Cheryl Strayed move me.

Two hours later I found myself in Garrison, NY, sinking into a mud-covered trail just yards from a noisy highway, barbed wire to my left and a partially obscured view of the frozen Hudson River to my right. Struggling to swallow my realization that the Sierra Nevada mountain range is not, in fact, accessible via Metro-North from Grand Central, I shoved a fistful of chocolate-covered pretzels into my mouth and grimaced into the icy wind. I trudged through the slush in an oval-shaped loop that spanned four flat miles. The train returned two hours later. There would be no memoir.

Sad, brief, and freezing as it may have been, my journey to Garrison was nothing short of miraculous. I, an accomplished cynic rarely moved to action by anything short of a legal mandate, had thrown dignity to the wind and paid $36 to march halfheartedly around the suburban tundra of the Hudson River Valley as the direct result of a literary memoir. The hype, it seems, was warranted. 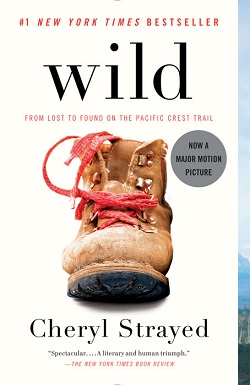 A solo thousand mile journey on the Pacific Crest Trail from the Mojave Desert through California and Oregon to Washington State taken by an inexperienced hiker is a revelation. Told with suspense and style, sparkling with warmth and humor, Wild powerfully captures the terrors and pleasures of one young woman forging ahead against all odds on a journey that maddened, strengthened, and ultimately healed her.

15 Books to Read Around the Campfire

10 Travel Memoirs to Take You Around the World