I’m interested in politics to the extent that I am loud and opinionated and enjoy yelling at people who don’t agree with me— all of this preferably while savoring pretentious coffee in a major metropolitan area.

In other words, I am a registered Democrat.

But! Regardless of affiliation, I’ve always been fascinated by those rare animals who can successfully navigate the middle of the road. People who transcend labels, accomplish greatness beyond the barrier of party lines, and work with their enemies.

Then there’s the opposite, which is far rarer: the person who has no enemies. Who interacts with various personalities, opinions, and methods, yes, but beyond that, makes everyone think he’s on their side. Dwight D. Eisenhower did that so crazily well that not only did both Democrats and Republicans court him for the 1952 election, both parties actually thought he was in their ranks. Can you imagine such a thing today? It’s almost impossible to fathom. I mean, there’s middle of the road, and then there’s paving the damn highway yourself.

Author Stephen E. Ambrose, in his giant, meticulously researched biography, Eisenhower, takes obvious glee in pointing out all his subject’s glorious political idiosyncrasies. And after a few chapters, you can’t begrudge him that. Ike was darn likeable, and had zero pretense—nor tolerance for falseness in others. Rational, calm, and above all, patriotic, he refused to do anything that wasn’t in his country’s best interests. In fact, that’s the only way he was convinced to run for office—after intense assurances that his candidacy, and his presidency, would be good for the nation.

Eisenhower was definitely not the first president to come from humble beginnings, nor was he the last—but what is so mind-boggling about his rise to the rank of commander in chief is how utterly boring his life was up until World War II. In fact, if U.S. involvement in the war had been delayed, Eisenhower—fifty-one years old when Pearl Harbor was attacked—would have been a well-respected, loyal, and amiable Army retiree, after forty years of exemplary (if lackluster) service. As Ambrose puts it, bluntly, if Eisenhower had “died in 1941, at an age when most great men have their monumental achievements behind them, he would be completely unknown today.”

But the war catapulted him to fame—not so much by coincidence, or luck, as by the basic fact that he was now doing what he’d always been meant to do. War made Ike shine. This is not to say he was a hawk (I was thunderstruck during the beginning of Oliver Stone’s film JFK, with Ike’s impassioned, cautionary speech warning against the power of the military-industrial complex); rather, he was incredibly adroit at reading and managing both people and events.

And that’s an understatement—he thrived on the stress, negotiation, and the limelight associated with war. He loved both the diplomacy and the strategy, and Ambrose, as his adoring biographer, loves it too. Which brings us to what is basically the only problem with the book: the author is a bit too enamored with his subject. There’s so much that is great about Eisenhower, but he wasn’t supernatural. And one of the most important achievements under his presidency—the unconstitutionality of segregation, as decided by Brown v. Board of Education of Topeka—was an issue Ike would have rather ignored. He adamantly refused to take a stand on the case. In fact, his sole contribution to the decision was appointing Earl Warren, who he thought of as a “liberal-conservative” similar to himself, as Chief Justice of the Supreme Court.

Ike’s comments on the South, and his “understanding” of the segregationists’ point of view, are difficult to read. But Ambrose makes an almost-valid point: Eisenhower may not have been the one to make the call, but he put in place the person who did. And his read on people was historically spot-on. From General George Marshall (loved him) to Chief Justice Warren to his own vice president, Richard Nixon (not a fan), Eisenhower knew who was and was not the right man for every job. He knew he couldn’t manage this great, giant, sprawling nation on his own. He knew that a true leader is a manager, and he was always on the lookout for the “right” person—he who was honorable, logical, ethical. Apparently, it takes one to know one. 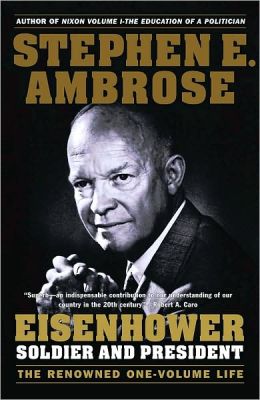 Stephen E. Ambrose draws upon extensive sources, an unprecedented degree of scholarship, and numerous interviews with Eisenhower himself to offer the fullest, richest, most objective rendering yet of the soldier who became president.

A Life Without Enemies