When Gene Kranz first walked onto Patrick Air Force Base in 1960 to join the “man in space” program, he didn’t necessarily know what he had gotten himself into. First, he was in the wrong part of the base (and was soon offered a hair-raising, rubber-burning ride by astronaut Gordon Cooper through the base to Mercury Control Center). He also hadn’t researched the program before joining. What he did know, however, was that he wanted to help develop NASA’s space missions. Three years earlier in 1957, the Russians launched Sputnik, starting the great space race. Encouraged and challenged by President Kennedy’s mandate to not just go into space but land a man on the moon, Kranz left his job testing aircrafts and joined NASA.

What he found at NASA was an initiative in its infancy, filled with geeky idealists grounded in science; brave daredevils willing to fly vessels that often had as many chances of failure as they did success; and a team able to plow through setback after setback, some risking their lives and others (like Kranz) entrusted with these lives, to achieve their goal.

Kranz’s Failure Is Not an Option is a riveting tale with an exciting insider’s perspective behind the space missions that thrilled the world. Kranz began his career writing operation procedures for flight controllers at Mercury Control Center (go/no go manuals that detailed what to do in the case of malfunctions or emergency situations) and eventually became a flight director, working on missions from Gemini to Apollo 11 to the 1993 shuttle mission to repair the Hubble Space Telescope, his last mission control project. He not only covers what happened on the ground while these vessels were in space, but vividly portrays everything from the vests his wife sewed for each flight to the cigarette smoke at consoles where his team watched over the progress of their missions to the temperaments of astronauts (as well as their penchant for getting speeding tickets).

For anyone who ever dreamed of being an astronaut as a child, this is as close as you can get to understanding everything that made space travel possible. Yet Failure Is Not an Option is also a lesson in great leadership and effective teamwork. When the service module on Apollo 13 exploded, leaving the astronauts in an ice box with rapidly depleting oxygen hurtling toward earth, Kranz and his team had to come up with instant solutions to save the crews’ lives. Realizing that everyone at Mission Control was essentially running around anxious and confused, Kranz calmed them down, telling them to trust their own judgment while creating an intense problem-solving area where people could bring their solutions to him, have them accepted, rejected, or relegated, and then step aside for others to present their calculations, thus thinning out the noise and focusing the entire team’s efforts on coming up with a solution. He said to them, “Flight control will never lose an American in space. You’ve got to believe . . . that this crew is coming home.” And come home they did, earning Kranz and his team as well as the astronauts a Presidential Medal of Freedom for their efforts.

Failure Is Not an Option is more than a book about space. It’s a book about indomitable will, persistence, and the creativity that has driven generations of Americans to explore their world for centuries.

Failure Is Not an Option
by Gene Kranz 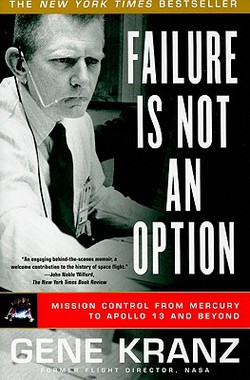 |+| Add to Your Shelf
Failure Is Not an Option
Gene Kranz

This memoir of a veteran NASA flight director tells riveting stories from the early days of the Mercury program through Apollo 11 (the moon landing) and Apollo 13, for both of which Kranz was flight director.

Out of This World: 7 Books to Help If You Are Lost In Space

To Infinity and Beyond: The Thrilling Story of How We Put a Man on the Moon