The first book I ever acquired as an editor was It’s All Too Much, by Oprah organizer and clutter buster extraordinaire, Peter Walsh. To say this book changed my life is not an overstatement. I live in a very small house with two daughters. They are teenagers who, even though they are the same size, do not share shoes or clothes, and who have a serious nail polish collection, among other things. When I started working on this book with Peter, they were six and their collections were of stuffed animals and too many toys. The nail polish and clothing has never overwhelmed me but the stuffed animals and toys almost did. And not just because of the size differential.

The thing that is so great about Peter’s approach to clutter is that he actually addresses the reasons you have too much. He doesn’t just have you fill and file Container Store boxes, he makes you get rid of what you don’t need—and helps you understand why you held on to it in the first place and why it’s really okay to let go of it now.

I had a very hard time editing this book because every time I sat down with my pencil I would read a couple pages and hop up to do what Peter recommended. The book is divided by room so as I edited each chapter I was in that room with my plastic bag cleaning drawers and shelves and closets. It was editing as catharsis.

The day I was reviewing the living room section, my daughters were both sick with sore throats. They lay on the couch watching TV while I alternated between editing and cleaning. I took a bag into their playroom and emptied all their toy bins—almost drowning in furry bunnies and stuffed horses. (I will say that before my kids were born I swore I would never let the stuffed animal thing get out of hand, and there I was staring my failure in its fluffy face, almost completely overwhelmed by a problem I had created.) I held up each toy and gave the girls the opportunity to say yea or nay, which, because they had sore throats, was done with their thumbs, Roman Colosseum–style. At the end of that two-hour episode I had three bags of toys to be given away or tossed and the playroom looked like a room again. To say I was hooked would be an understatement.

Peter’s message is simple but hard to do: don’t own what you don’t need and for everything that comes in to your house something has to go out. For someone like me, with a bad T.J.Maxx habit, that was really hard to do. But I did it: I followed his advice, turning the hangers in my closet backwards and only turning them when I wore something. After a year I realized my closet was full of clothes I did not wear and that they were crushing the clothes I did wear. I gave them away.

To this day, every time I want to buy something I hear Peter’s voice and I imagine where that something new will go and what I will have to get rid of to make room for it; usually I put the shiny thing back and go home. Almost always I feel buoyant about the choice too: money still in my pocket and room still in my house.

This isn’t a book about living within your means but about what living means. It’s about the choices you will make to clear your home and your life and it’s about finding and making peace in your own place. Once you read it you will never forget Peter’s message, and if you take his advice to heart, it will change your life. I bet you a stuffed bunny it will.

It's All Too Much: An Easy Plan for Living a Richer Life with Less Stuff
by Peter Walsh 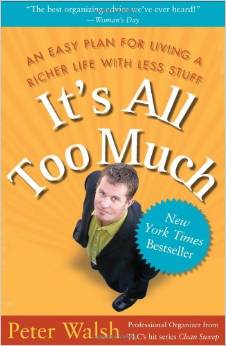 |+| Add to Your Shelf
It's All Too Much: An Easy Plan for Living a Richer Life with Less Stuff
Peter Walsh

Who doesn't love a good New Year's Purging of ALL THE STUFF in The Basement/Storage Room/Bedroom Closet? We recommend this book often, and we've reviewed it before. It's an excellent place to start, and Peter Walsh knows how to get in your head and how to get things organized.

8 Titles to Help Keep Your Resolutions

Letting It Go: My Quest to Be As Organized as Oprah