Off the Shelf sat down to talk to Brigid Paskula, who has just published a wonderful novel, The Sun and Other Stars, that is set in a little town in Italy and is filled with charming characters and romance. The story, which centers around Etto, a butcher’s son, and his friends is about love and forgiveness and cleverly uses soccer as the connection between all the characters and their stories.  Having just lived through the passion of the World Cup we were intrigued about what made Brigid decide to mix love and calcio, what it’s like to live in Italy, and how a small Italian village is just like living in north-west Illinois.

Have you ever lived in a village like San Benedetto, and what was your experience there?

I took a job as a babysitter in Alassio, Italy the summer I turned 26. The family was wonderful. Everyone in the town knew them and by extension, knew who I was. Our mornings were spent at the beach in front of their house, then we would have lunch and a nap, and run errands in the afternoon. One of the regular errands was a butcher shop called Macelleria Valdora which was run by a guy my age named Nello and his parents.

I never really got to know Nello besides the usual pleasantries, but somehow I felt a real kinship with him. My siblings and I had grown up working in my dad’s business, and yet for us, taking it over was out of the question, and even the day-to-day work remained a little mysterious. So I kept the idea of the son of a butcher in my head for almost ten years before I actually started writing the book.

Probably the most important thing I got from the summer I spent in Alassio was experiencing another version of the intimacy I’d grown up with. (I spent most of my childhood in a farming township in north-central Illinois.) When I broke my nose, for example, the entire town somehow knew exactly how it had happened, when my doctor appointments were and when I was getting each set of bandages off. One day not long after it had healed, an old man I’d never met before came up to me, surveyed my nose and said, “Well, it’s got a little bump in it…but they say it was crooked to begin with anyway.” I think it’s that lack of anonymity I felt that was the most useful in recreating Etto’s world.

Of course, once I started writing, I realized very quickly that if I wanted to write about the real Italy and not the Disneyland Italy, I would have to integrate soccer. It’s such a part of daily life there; I don’t think the Italians even notice it as something remarkable.

Did you have to do much research on soccer while you were writing the book?

I had few encounters with soccer before I began writing this book. During the summer I spent in Alassio, the father of the family I was babysitting for worked for various Serie A teams. So he was my introduction to the world of soccer.

Another important encounter was in 2007, just as I was starting to write the novel. I happened to be in Ukraine volunteering at an English immersion program in the countryside. One of the students always wore a jacket that had “Italia 1982” emblazoned on it. I was interested in all things Italian, so I stopped him one day and asked what had happened in Italy in 1982. The guy looked at me like I had three heads and then patiently explained to me that it was the year of the Italians’ great World Cup victory. I think a lot of Etto’s relationship to soccer and his community was forged in that moment, when I felt so completely disconnected from the rest of the world.

I started researching by talking to soccer-obsessed friends and students. After I was finished, I had two soccer coaches read the manuscript and edit me. In between, I read several books about soccer, but probably the most useful resource was YouTube. Just about everything I was curious about had been meticulously recorded and shared on YouTube–goals scored in the 60s, footage of Lazio Ultras taking over a rival’s train station, chants. My favorite was a recurring TV segment where various players would tell jokes about Roma captain, Francesco Totti. Sometimes Totti would tell the jokes himself, but he rarely made it to the end without cracking up. I used to view this obsessive chronicling of sports as a waste of time, but as I write in the acknowledgments, I now see it as a labor of love and a celebration of life.

Are there any books on soccer or Italy that you’d recommend?

I just read Pele’s book, Why Soccer Matters, and really enjoyed the small details. Franklin Foer’s book, How Soccer Explains the World is great, though Paddy Agnew’s Forza Italia, was more useful to me because it focused on Italy during the time period I was writing about. The Miracle of Castel di Sangro by Joe McGinniss tells the story of a very insignificant and somewhat bumbling Italian team who, in an incredible year, make their way up to Serie B. There don’t seem to be many books written about Liguria. I was lucky to come across Annie Hawes memoir about how she and her sister took summer jobs in the hills of Liguria and ended up staying. The book possibly wins the award for the worst title ever–Extra Virgin: A Young Woman Discovers the Italian Riviera, Where Every Month Is Enchanted, but if you can get past the title, it’s definitely worth it.

The Sun and Other Stars
by Bridgid Paskula 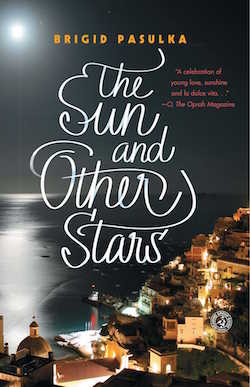 |+| Add to Your Shelf
The Sun and Other Stars
Bridgid Paskula

12 Books to Celebrate the Solar Eclipse

For Fans of Beautiful Ruins: A Novel of Hope and Community in an Italian Village

How Soccer Can Lead to Love