I love this country. Americans are friendly, loud, funny, and clever. We all just want to have a good time, right? No harm intended, just enjoy our family and friends, do what we like, etc. But upon reading and re-reading A Renegade History of the United States by Thaddeus Russell, I’m still surprised to think that the birth of American governance wasn’t just to break away from England, but also to suppress that most delightful American characteristic: the pursuit of happiness. Or, as some might call it, fun. As others might call it, vice.

When I first read this thoughtfully, cleverly researched book, I was stunned to read about how alcohol, dance halls, taverns and prostitution were so common in pre-Revolution days that our founding fathers sought to fight two wars: one to liberate the colonies from British rule and the other to liberate the new government from the crippling vices of the new American culture. Reading it again and again, I love how Russell convincingly and delightfully argues that rumrunners and speakeasies improved American culture; Hollywood roots were sown by Jewish rebels and gangsters who fought against Thomas Edison and his inventions; and country music grew from anti-WWII sentiment in white, working-class society.

I keep coming back to this book because I love hearing about history from the perspectives of people who weren’t on the front pages, who were just living their lives and enjoying themselves when they could. I seek to understand why people want to change the law or disregard it completely in the name of personal freedom. This book also reminds me that democracy is an ebb and flow of give and take, between the liberal and the conservative, the wealthy and the poor, the established and the rebellious. I want to understand why there is such hatred of non-white, non-WASP cultures in our history. I wonder how, in the great melting pots of taverns and dance halls, all of us – strangers in our own country – have found that we have so much in common (we like to have fun!). Even though we all want to have a good time, we can’t stand the thought that other people want to limit how much fun we have. I recommend this book constantly to people who are interested in American history but have nightmares about high school history class.

I’m proud to be American, and I’m proud that one of our distinguishing characteristics is that we push and work to make our nation and our world a little better than it was. We don’t like to be told what to do. We go against the grain to prove to ourselves and others that we can do anything we dream of doing. To be American is to be a renegade. And as this book reminds me, being a renegade is pretty damn cool.

A Renegade History of the United States
by Thaddeus Russell 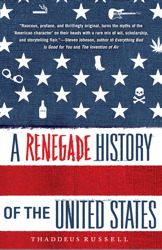