Carol Sklenicka is the author of “Raymond Carver: A Writer’s Life” –  named one of the “Best 10 Books of 2009” by The New York Times Book Review, and one of the best 100 books of the year by The San Francisco Chronicle, The Oregonian, The Seattle Times, and The Washington Post.  To research the life of Raymond Carver, she studied archives and visited towns all over the United States and conducted hundreds of interviews with his relatives, friends, and colleagues. She lives with her husband, poet R. M. Ryan, near the Russian River in California.

I’d never written a biography when I began Raymond Carver: A Writer’s Life, so I set about researching the book by going to Yakima, Washington, the town where Carver grew up. That was almost twenty years ago.

I’d read somewhere about a Yakima newspaper editor who’d been in Carver’s high school class, and he gave me a list of people who might have known Ray. My several visits to Yakima were brief, but urgent. I didn’t want to miss any of the old Arkansawyers and sawmill workers who had known Carver’s parents, or any of Carver’s former schoolteachers. Some of his high school classmates, then in their sixties, were none too healthy themselves.

Like Carver, who died at the age of fifty in 1988, his friends had worked and partied hard. They were amazed by their old friend’s fame. And, like him, they were storytellers. Listening to and recording these people, I absorbed Carver’s childhood and youth. With their directions, I drove the country roads that Ray and his father had known in the 1940s and 1950s, and understood the loneliness and latent violence at the root of Carver’s famous short stories.

In this chronological-geographical manner I worked on Carver’s biography for more than a decade, going to every place he’d ever lived except Tel Aviv, and talking to everyone I could find who remembered him. Eventually this process allowed me to meet members of his family and some of his illustrious writer friends, as well as many fine, ambitious writers whose work had already fallen into oblivion. I was touched in some way by all of them.

But Carver’s life had some very dark passages. As an end-stage alcoholic he was a violent and negligent husband and father. Writing about these things was painful and often made me wonder if I wanted to complete the book. Luckily, Leonard Michaels, whom I interviewed by email from Italy before he died in 2003, helped me find a literary agent.

My agent brought my proposal to Scribner editor Colin Harrison, who had literally been touched by Carver when they shook hands at the Iowa Writer’s Workshop’s golden jubilee celebration. Harrison was curious to know the full story of Carver’s life. Since Raymond Carver is an heir of Hemingway and Fitzgerald in American short story writing, and Scribner had published both, I was thrilled that Scribner would publish Carver’s biography.

With Harrison’s encouragement—and a deadline—I finished a 1,400-plus-page manuscript in 2008. We collaborated in a trimming/editing/production process that I considered painful at the time. (“Why not two volumes?” I asked.) Harrison’s editorial sense and novelist’s acumen prevailed in the 500-page book (plus notes) published in November 2009.

One of the first readers of Raymond Carver: A Writer’s Life, novelist Benjamin Percy, commented that the biography is “full-throated with the voices of those who knew” Carver. This was, for me, the highest possible compliment to my research. I’m especially pleased still, five years later, to meet young writers who have been cautioned and inspired by Raymond Carver’s life story and to know that Carver’s fans in Italy, China, Japan, Korea, and France are now able to read my book in translation. 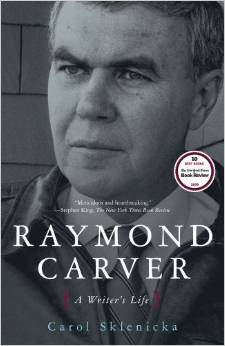