Schroder is a journalist who started to write about psychiatrist Dr. Brian Weiss’s work with hypnosis and past life regression. As intriguing as he found Dr. Weiss’s accounts of how past life regression actually helped heal present day trauma in many patients, Schroder was not convinced these memories were real. Patients did not bring up details of place or names that could be verified; they did not speak in any language but their own; sometimes the lives they remembered occurred simultaneously in completely different parts of the world.  What Schroder wanted was proof of the experiences, which led him to Dr. Ian Stevenson.

Stevenson is also a psychiatrist, also dealing with people purporting to have past life experiences but these people were not adults using hypnosis, these were children who matter-of-factly, almost from the moment they could talk, told everyone who they were and where they belonged. And they were adamant they did not belong as babies in the houses where they were living. They were adults who remembered very specific details about who they were and they all wanted to go back home.

Schroder joins Dr. Stevenson on his journeys to interview subjects as he searches for concrete details that corroborate stories of reincarnation. There are many stories, and reading each one makes you believe that there is something happening beyond what we can easily explain.

In South Carolina, Robert keeps talking about growing up on a farm, smoking in the shed at thirteen, something his parents discount till they accidentally drive up a dirt road and Robert jumps up and down excitedly saying “this is the road to my house.” They do not see a shed and tell Robert he is wrong but he says, “Drive a little further” and when they pull past the white farm house, there in the back is a shed.

In Beirut they visit Daniel Jirdi, a twenty-seven-year-old accountant who from a very young age insisted that he was Rashid Kahddege, a young man who died in an auto accident in 1968. Daniel recounts such specific details of the accident that they cannot be made up. When walking through the streets of another town he sees the man who was driving the car that killed him and calls out to him. He remembers people, places and things that cannot have been “coached” into him.

My favorite story is of Suzanne Ghanem who, insists that she was Hanan Mansour a woman who had died during surgery in the United States. Her first words shouted into a phone when she was sixteen months old, were, “Hello, Leila?”  Hanan Mansour had died after trying to reach her daughter Leila on the phone.  By the time she was two Suzanne could remember the names of her husband, children, parents, and brothers – thirteen names in all – and she insisted that her real family lived elsewhere.  She finally meets them and tells them details of their childhoods and her marriage to Farouk that only a mother and wife would know.

These stories sometimes make the hair on your neck stand up. When Stevenson discovers birthmarks on some children that correspond to wounds on the deceased it really gets spooky. But Schroder is a skeptical narrator and Stevenson works hard to find proof in every story so that as you read you come to believe that these stories are real, these experiences happened and it is possible that reincarnation occurs.

Old Souls: Compelling Evidence from Children Who Remember Past Lives
by Tom Shroder 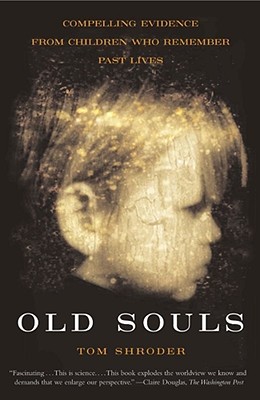 |+| Add to Your Shelf
Old Souls: Compelling Evidence from Children Who Remember Past Lives
Tom Shroder

A riveting firsthand account of one man’s mission to investigate and document some of the most astonishing phenomena of our time—children who speak of past life memory and reincarnation.