Barry Strauss, Bryce and Edith M. Bowmar Professor in Humanistic Studies and Chair of the Department of History at Cornell University, is an acclaimed historian and classicist, and an award-winning teacher and author. Off the Shelf asked him to tell us about one of his favorite books.

I discovered Herodotus’s Histories in a 1970s Penguin edition with a cover picture that looked like the ancient Greek equivalent of a panhandler—a statue with a needy look and an upraised palm. There is indeed something of the wino about Herodotus, with his six-hundred-plus pages of nonstop stories and seemingly random digressions, but his is not a book to judge by its cover. The statue was a seated Greek philosopher, anyhow, not the historian, and Herodotus is no rambler. He is simply one of the greatest storytellers who ever wrote. His narrative ability is one of the reasons that his critics sneered at him as the father of lies, a jab at those who call Herodotus the father of history. Now that title is one that he richly deserves. A Greek who lived in the fifth century BC, Herodotus was a pathfinder. He traveled the eastern Mediterranean and beyond to do research into human affairs: from Greece to Persia, from the sands of Egypt to the Scythian steppes, and from the rivers of Lydia to the dry hills of Sparta. The Greek for “research” is historia, where our word “history” comes from.

As for the lies, they are an unjust charge. Herodotus is a great historian. His work holds up very well when judged by the yardstick of modern scholarship. But he is more than a historian. He is a philosopher with three great themes: the struggle between east and west, the power of liberty, and the rise and fall of empires. Herodotus takes the reader from the rise of the Persian Empire to its crusade against Greek independence, and from the stirrings of Hellenic self-defense to the beginnings of the overreach that would turn Athens into a new empire of its own. He goes from the cosmos to the atom, ranging between fate and the gods, on the one hand, and the ability of the individual to make a difference, on the other.

And then there is the sheer narrative power of his writing. It came back to me often when I researched and wrote my book Battle of Salamis: The Naval Encounter that Saved Greece—and Western Civilization. Herodotus was my constant companion then. It’s not that his account is perfect; far from it. It takes things for granted that are now lost to time (precisely how ancient warships attacked, for example) and it leaves unanswered questions that a modern reader would like to know (e.g., how the wounded were treated). But it offers an unmatched eye for detail, from the lies told by Greek generals to the arrogance of Persia’s King Xerxes, who watched from his throne on the shore as his planned victory went down at sea. Then there is the point that seems impossible and yet is true, the role of the individual who is perhaps history’s first female admiral, Artemisia of Halicarnassus. She fought at Salamis, a half-Greek in the service of Persia. She did so well that Xerxes was moved to exclaim in frustration, “My men have become women and my women have become men!” Or so they said later.

It was probably inevitable that Hollywood would go to town with Artemisia in its retelling of the story in 300: Rise of an Empire. It’s not surprising that they turn the story on its head. As played by the sultry Eva Green, the film’s Artemisia steals the show. Yet Herodotus’s original has nothing to worry about from the competition. The old master keeps calling us back.

The Histories
by Herodotus 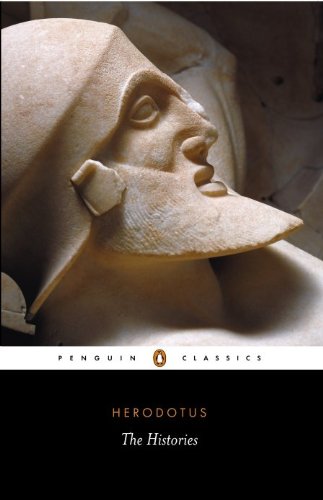 |+| Add to Your Shelf
The Histories
Herodotus

Herodotus is not only the father of the art and the science of historical writing, but also one of the Western tradition's most compelling storytellers. In tales such as that of Gyges, who murders Candaules, the king of Lydia, and usurps his throne and his marriage bed, thereby bringing on, generations later, war with the Persians, Herodotus laid bare the intricate human entanglements at the core of great historical events.

One of the Greatest Storytellers Who Ever Lived